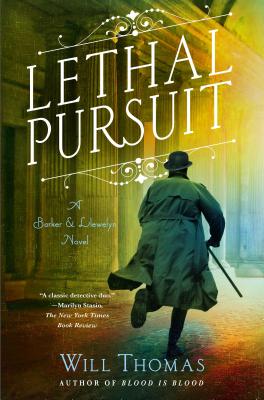 London, 1892—Cyrus Barker is brought into a game of international espionage by the Prime Minister himself in the newest mystery in Will Thomas's beloved series.

"Think a Victorian-era Archie Goodwin narrating the exploits of a sleuth with an Indiana Jones-esque penchant for derring-do...There is really nothing out there quite like it." —BookPage

"The author is so talented that the novel works both as an enjoyable romp and as a comment on Victorian issues both societal and political. He weaves in history—London especially comes alive—without it seeming like clumps of a school lesson and gives just enough background so that new readers aren't lost in arcane references to past events. Even the most observant reader will be surprised at the final twists and turns and hope for another case soon." —Kirkus Reviews (starred review)

WILL THOMAS is the author of the Cyrus Barker and Thomas Llewelyn series, including The Black Hand, The Hellfire Conspiracy, The Limehouse Text, To Kingdom Come, and the Shamus and Barry award-nominated Some Danger Involved. He lives with his family in Oklahoma.
Loading...
or support indie stores by buying on