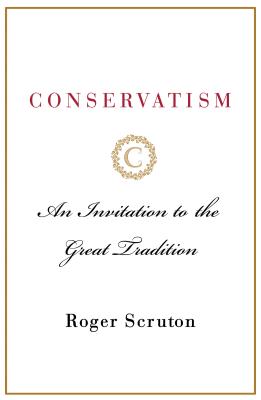 An Invitation to the Great Tradition

“…one of the most eloquent and even moving evocations of the conservative tradition in Western politics, philosophy and culture I have ever read…the ideal primer for those who are new to conservative ideas…” —Richard Aldous, Wall Street Journal

A brief magisterial introduction to the conservative tradition by one of Britain’s leading intellectuals.

In Conservatism, Roger Scruton offers the reader an invitation into the world of political philosophy by explaining the history and evolution of the conservative movement over the centuries. With the clarity and authority of a gifted teacher, he discusses the ideology's perspective on civil society, the rule of law, freedom, morality, property, rights, and the role of the state. In a time when many claim that conservatives lack a unified intellectual belief system, this book makes a very strong case to the contrary, one that politically-minded readers will find compelling and refreshing.

Scruton analyzes the origins and development of conservatism through the philosophies and thoughts of John Locke, Thomas Hobbes, Adam Smith and Milton Friedman, among others. He shows how conservative ideas have influenced the political sector through the careers of a diverse cast of politicians, such as Thomas Jefferson, Benjamin Disraeli, Ronald Reagan and Margaret Thatcher. He also takes a close look at the changing relationship between conservative politics, capitalism, and free markets in both the UK and the US. This clear, incisive guide is essential reading for anyone wishing to understand Western politics and policies, now and over the last three centuries.


Praise For Conservatism: An Invitation to the Great Tradition…

"Conservatism, as Roger Scruton reminds us, was founded during the 18th-century Enlightenment…Society is best seen as a social contract, these Enlightenment thinkers said. Free individuals get together and contract with one another to create order. Conservatives said we agree with the general effort but think you’ve got human nature wrong.” —David Brooks, New York Times

"[Conservatism] buoyed my spirits, and helped me regain my bearings. Reading it, for me, was like feeling an unexpectedly cool, dry breeze on a stiflingly humid day." —Andrew Sullivan, New York Magazine

Sir ROGER SCRUTON is a writer and philosopher who has published more than forty books in philosophy and politics, including Kant and An Intelligent Person's Guide to Philosophy. He is widely translated. He is a fellow of the British Academy and a Fellow of the Royal Society of Literature. He teaches in both England and America and is a Senior Fellow at the Ethics and Public Policy Center, Washington D.C. He is currently teaching an MA in Philosophy for the University of Buckingham.
Loading...
or support indie stores by buying on
(This book is on backorder)