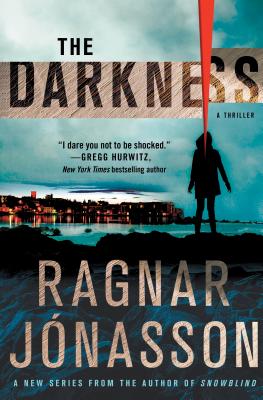 A Thriller (The Hulda Series #1)

Spanning the icy streets of Reykjavik, the Icelandic highlands and cold, isolated fjords, The Darkness is an atmospheric thriller from Ragnar Jonasson, one of the most exciting names in Nordic Noir.

The body of a young Russian woman washes up on an Icelandic shore. After a cursory investigation, the death is declared a suicide and the case is quietly closed.

Over a year later Detective Inspector Hulda Hermannsdóttir of the Reykjavík police is forced into early retirement at 64. She dreads the loneliness, and the memories of her dark past that threaten to come back to haunt her. But before she leaves she is given two weeks to solve a single cold case of her choice. She knows which one: the Russian woman whose hope for asylum ended on the dark, cold shore of an unfamiliar country. Soon Hulda discovers that another young woman vanished at the same time, and that no one is telling her the whole story. Even her colleagues in the police seem determined to put the brakes on her investigation. Meanwhile the clock is ticking.

Hulda will find the killer, even if it means putting her own life in danger.


Praise For The Darkness: A Thriller (The Hulda Series #1)…

Ragnar Jonasson hailed as one of "the heirs to the Agatha Christie crown" by The Daily Telegraph (UK).

"Jónasson manages to resolve the plot lines plausibly, and is as strong as ever at combining fair-play with psychological depth." —Publishers Weekly

"The Darkness is a bullet train of a novel, at once blazingly contemporary and Agatha-Christie old-fashioned. With prose as pure and crisp as Reykjavik snowcrust, Ragnar Jónasson navigates the treacherous narrative with a veteran’s hand. I reached the end with adrenalized anticipation, the final twist hitting me in the face. I dare you not to be shocked." —GREGG HURWITZ, New York Times bestselling author

"The Darkness is a true masterpiece of a crime novel, introducing an original protagonist, a plot full of twists and turns and an ending that leaves you gasping for air." —YRSA SIGURDARDOTTIR, bestselling Icelandic crime writer

"The Darkness is Ragnar Jonasson at the top of his game - deft plotting, a great central character and a story as chilling as the Icelandic winter. I couldn't put it down." —WILLIAM RYAN, bestselling author of The Holy Thief

RAGNAR JONASSON is an internationally number-one bestselling author who has sold more than two million books in thirty-two countries worldwide. He was born in Reykjavik, Iceland, where he also works as an investment banker and teaches copyright law at Reykjavik University. He has previously worked on radio and television, including as a TV news reporter for the Icelandic National Broadcasting Service, and, from the age of seventeen, has translated fourteen of Agatha Christie's novels. His critically acclaimed international bestseller The Darkness is soon to be a major TV series.