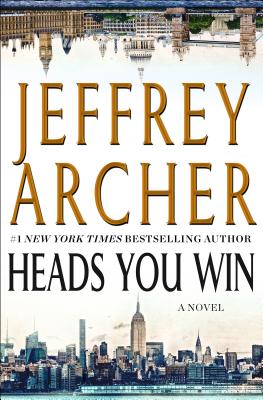 Heads You Win is international #1 bestseller Jeffrey Archer’s most ambitious and creative work since Kane and Abel, with a final twist that will shock even his most ardent of fans.

Leningrad, Russia, 1968: From an early age it is clear that Alexander Karpenko is destined to lead his countrymen. But when his father is assassinated by the KGB for defying the state, Alexander and his mother will have to escape Russia if they hope to survive. At the docks, they have an irreversible choice: board a container ship bound for America or one bound for Great Britain. Alexander leaves the choice to a toss of a coin…

In a single moment, a double twist decides Alexander’s future. During an epic tale, spanning two continents and thirty years, we follow Alexander through triumph and defeat as he sets out on parallel lives as Alex in New York and Sasha in London. As this unique story unfolds, both come to realize that to find their destiny they must face the past they left behind as Alexander in Russia.


Praise For Heads You Win: A Novel…

“Archer, no stranger to sprawling epics, covers three decades in the life of Alex/Sasha, working his way to a stunning conclusion that packs a wallop. Typical for an Archer novel, the writing and characterizations are superb, and the book features several plot twists that send the story lines off in surprising new directions. There are a couple of moments, late in the novel, that should make readers’ jaws drop – moments so unexpected and surreal that they require a second reading, just to make sure we really just read what we think we did.” – Booklist (starred review)