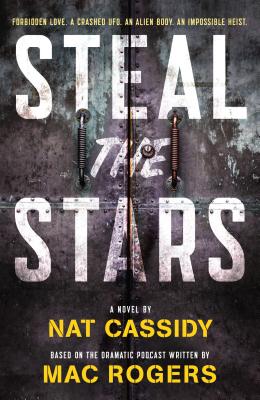 Steal the Stars, a debut novel by Nat Cassidy, is based on the science fiction podcast from Tor Labs, written by Mac Rogers.

Dakota “Dak” Prentiss guards the biggest secret in the world.

They call it “Moss.” It’s your standard grey alien from innumerable abduction stories. It still sits at the controls of the spaceship it crash-landed eleven years ago. A secret military base was built around the crash site to study both Moss and the dangerous technology it brought to Earth.

It’s love at first sight—which is a problem, since they both signed ironclad contracts vowing not to fraternize with other military personnel. If they run, they’ll be hunted for what they know. Dak and Matt have only way to be together: do the impossible. Steal Moss and sell the secret of its existence.

And they can’t afford a single mistake.


Praise For Steal the Stars: A Novel…

Praise for the Steal the Stars novel

“A brilliant job of adapting the podcast's scalpel-sharp pacing, heartbreaking characters and flawless execution of a fascinating premise into a new format.”—NPR

“The style and tone are unique and vibrant, and it’ll leave you wanting to rant and debrief with your friends.”—Chapters in Flux

“A fun read for sci-fi readers.”—Borg.com

Praise for the Steal the Stars podcast

“An extraordinary show in every way, Steal the Stars is a high-water mark for audio drama and podcasting.”—Tor.com

"Doesn't so much raise the bar on audio drama as launch it into space." —Amal El-Mohtar, author of "Seasons of Glass and Iron"

"Snappy, fast-paced, and ferocious." —Paul Cornell, author of The Lost Child of Lychford and the Shadow Police series

"Thrilling and intimate." —Mary Robinette Kowal, author of Shades of Milk and Honey

“A UFO story, a military thriller, a sexy romance, and a tech-industry satire all at once—and it's a total blast to listen to. Get ready to get obsessed.” —Dan Kois, Culture Editor, Slate.com

"Everything I love about great science fiction adventure." —Geoffrey Thorne, co-producer of Leverage

"This is rad and you're gonna wanna get in on it." —Brooke Bolander, author of "Our Talons Can Crush Galaxies"

NAT CASSIDY is a playwright, actor, director, musician, and the winner of 17 Indie Theater awards. Steal the Stars is his first novel.

NAT CASSIDY is a playwright, actor, director, musician, and the winner of 17 Indie Theater awards. Steal the Stars is his first novel.
Loading...
or
Not Currently Available for Direct Purchase