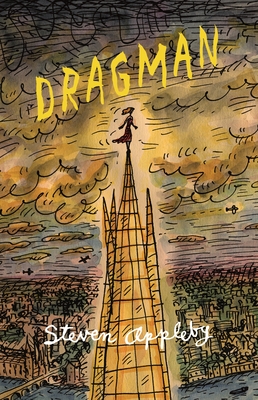 From "Britain's most loved comics artist" comes a superhero epic like no other—an ordinary man gains superpowers by donning women’s clothing, saving London and maybe even himself.

August Crimp can fly, but only when he wears women’s clothes. Soaring above a gorgeous, lush vista of London, he is Dragman, catching falling persons, lost souls, and the odd stranded cat. After he’s rejected by the superhero establishment, where masked men chase endorsement deals rather than criminals, August quietly packs up his dress and cosmetics and retreats to normalcy — a wife and son who know nothing of his exploits or inclinations.

When a technological innovation allows people to sell their souls, they do so in droves, turning empty, cruel, and hopeless, driven to throw themselves off planes. August is terrified of being outed, but feels compelled to bring back Dragman when Cherry, his young neighbor, begs him to save her parents. Can Dragman take down the forces behind this dreadful new black market? Can August embrace Dragman and step out of the shadows?

The debut graphic novel from British cartoon phenomenon Steven Appleby, Dragman is at once a work of artistic brilliance, sly wit, and poignant humanity, a meditation on identity, morality, and desire, delivered with levity and grace.


Praise For Dragman: A Novel…

"Fans of Steven Appleby's brilliant cartoons know already of their unique energy; his first long-form graphic novel will surely bring him massed armies of new admirers. Funny, sweet, and emotionally true, it doesn't so much tiptoe on to fraught cultural territory as dance wildly across it." —The Guardian

"An intricately plotted graphic novel, complete with a serial-killer mystery (trans women are being murdered in gruesome circumstances), plenty of social satire, philosophical ruminations and elements of autobiography. . . . Dragman is the fable we need for a changing world." —Times Literary Supplement

"Fabulous! Only Steven Appleby could or would lob in such a profound statement of elevating empowerment and celebration disguised as a superhero sub-plot. . . . . This is an astutely insightful comedy [with] the nimblest and most nubbly of lines." —Page 45

Steven Appleby is an acclaimed British artist who has created comic strips for the Guardian, The Times, and the New Musical Express, among numerous other periodicals. He has also created and written a comedy series for BBC Radio 4; a highly successful animated television series, Captain Star; and regularly exhibits paintings and drawings. He lives in London.
Loading...
or support indie stores by buying on