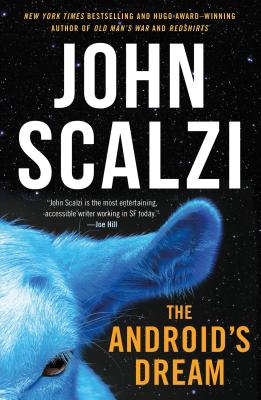 From New York Times bestseller and Hugo Award-winner John Scalzi, a trade paperback repackage of his wild-and-woolly caper novel of interstellar diplomacy—now with a new cover!

To find the sheep, the government turns to Harry Creek, ex-cop, war hero and hacker extraordinare, who, with the help of a childhood friend turned artificial intelligence, scours the earth looking for the rare creature. But there are others with plans for the sheep as well. Mercenaries employed by the military. Adherents of a secret religion based on the writings of a 21st century SF author. And alien races, eager to start a revolution on their home world and a war on Earth.


Other Tor Books by John Scalzi:

Praise for The Android's Dream

"With plenty of alien gore to satisfy fans of military SF and inventive jabs at pretend patriotism and self-serving civil service, Scalzi delivers an effervescent but intelligent romp." —Publishers Weekly

"The whip-smart writing exudes his enjoyment in such a way that almost guarantees the reader will take pleasure in the story as well....Humor is hard to do well; it has to be natural, non-intrusive and funny at the same time. Scalzi pulls it off exceptionally well." —SFSignal.com

"This novel reads like prime-period Robert A. Heinlein, cyber-charged for the 21st century. ...just a whole lot of old-fashioned SF fun....Highly, and enthusiastically, recommended." —SF Site

"Scalzi is a master at creating appealing commercial fiction." —Kirkus Reviews, starred review, on Lock In