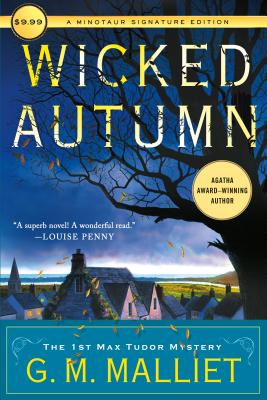 “Rarely have I read descriptions that have left me gasping, in both their hilarity and their painful truth. A wonderful read.” —Louise Penny, New York Times bestselling author

Having spent almost three years in the idyllic village of Nether Monkslip, Max Tudor is well acclimated to his post as vicar at the church of St. Edwold's. This quaint town seems to be the perfect new home for Max, who has fled a harrowing past serving in the British counter-intelligence agency, the MI5. Now he has found a measure of peace among urban escapees and yoga practitioners, artists and New Agers. But this serenity is quickly shattered when the highly vocal and unpopular president of the Women's Institute turns up dead at the Harvest Fayre. The death looks like an accident, but Max's training as a former agent kicks in, and before long he suspects foul play.

Max has ministered to the community long enough to be familiar with alliances and animosities among the residents, but this tragedy confounds him. It is impossible to believe anyone in his lovely hamlet capable of the crime, and yet given the victim, he must acknowledge that almost everyone in town had probably fantasized about the poor woman's death. As Max becomes more intricately involved, the investigation stirs up memories he'd rather not revisit; the demons from his past which led him to Nether Monkslip and the reason why he is so heavily invested in keeping it from harm.

Agatha-award winning author G.M. Malliet first won over the mystery community with her St. Just trilogy, prompting critics to compare her to Golden Age greats like Agatha Christie and Dorothy Sayers. This new series, beginning with Wicked Autumn, confirms such praise, serving up the perfect English village deliciously skewered in a brilliantly modern version of the traditional drawing room mystery.

G. M. MALLIET's Death of a Cozy Writer received the Agatha Award for Best First Novel and was named one of the best books of 2008 by Kirkus Reviews. It went on to earn nominations for Anthony, Macavity, and Left Coast Crime awards. The first books in the Max Tudor series—Wicked Autumn, A Fatal Winter, Pagan Spring, and A Demon Summer—also were nominated for the Agatha Award. She and her husband live in Virginia and travel frequently to the UK, the setting for many of her stories.
or
Buy Here
Copyright © 2020 American Booksellers Association