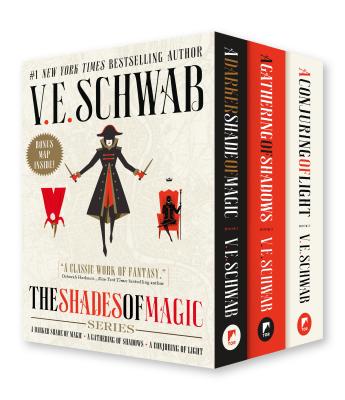 A Darker Shade of Magic, A Gathering of Shadows, A Conjuring of Light

Experience the fate of beloved heroes and notorious foes in V. E. Schwabs New York Times bestselling Shades of Magic trilogy together in a boxset with additional content

Kell is one of the last Antarimagicians with a rare, coveted ability to travel between parallel Londons; Red, Grey, White, and, once, Black. Unofficially, Kell is a smuggler, servicing people willing to pay for even the smallest glimpses of a world they'll never see. It's a defiant hobby with dangerous consequences.

A Darker Shade of Magic

Kell serves the Maresh EmpireRed London, as he calls itas an official ambassador, traveling between the frequent bloody regime changes in White London and the court of George III in the dullest of Londons. After one such visit goes awry, Kell escapes his home for Grey London and runs into Delilah Bard, a cut-purse with lofty aspirations. Now perilous magic is afoot, and treachery lurks at every turn. To save all of the worlds, they'll first need to stay alive.

A Gathering of Shadows

While Red London is caught up in the pageantry and thrills of the Element Games, another London is coming back to life, and those who were thought to be forever gone have returned.

A Conjuring of Light

As darkness sweeps the Maresh Empire, the once precarious balance of power among the four Londons has reached its breaking point.


Praise For Shades of Magic Boxed Set: A Darker Shade of Magic, A Gathering of Shadows, A Conjuring of Light…

Praise for Shades of Magic Trilogy

"Addictive and immersive, this series is a must-read." Entertainment Weekly, Grade A, on A Gathering of Shadows

"Compulsively readable." NPR on A Darker Shade of Magic

"Feels like a priceless object, brought from another, better world of fantasy books." io9 on A Darker Shade of Magic

"Inventive fantasy... for Neil Gaiman fans." The Guardian on A Darker Shade of Magic

"A Conjuring of Light is everything I wanted, desired, dreamed ofand then some." The Booksmugglers

"Impossible to put down." Kirkus Reviews on A Gathering of Shadows

"This is how fantasy should be done." Publishers Weekly, starred review, on A Gathering of Shadows

"Full of magic, intrigue, adventure, deception, a bit of piracy...this will engage both adult and young adult fantasy readers alike. Booklist on A Darker Shade of Magic

"Flawless prose...the bittersweet conclusion is a fitting one for a fantastic, emotionally rich series that redefines epic." Publishers Weekly on A Conjuring of Light

VICTORIA V.E. SCHWAB is the #1 New York Times bestselling author of more than a dozen books, including the acclaimed Shades of Magic series, Villains series, This Savage Song, and Our Dark Duet. Her work has received critical acclaim, been featured in the New York Times, Entertainment Weekly, Washington Post and more, translated into more than a dozen languages, and has been optioned for television and film. When shes not haunting Paris streets or trudging up English hillsides, she lives in Edinburgh, Scotland and is usually tucked in the corner of a coffee shop, dreaming up monsters.
Loading...
or support indie stores by buying on