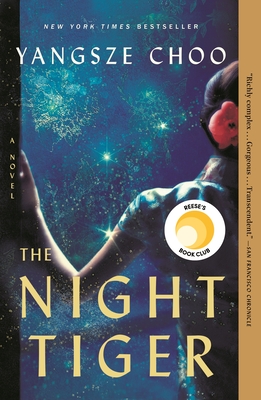 “A sumptuous garden maze of a novel that immerses readers in a complex, vanished world.” —Kirkus (starred review)

As the days tick relentlessly by, a series of unexplained deaths racks the district, along with whispers of men who turn into tigers. Ji Lin and Ren’s increasingly dangerous paths crisscross through lush plantations, hospital storage rooms, and ghostly dreamscapes.

"A work of incredible beauty... Astoundingly captivating and striking... A transcendent story of courage and connection." —Booklist (starred review)

“This is the kind of book that when you read it, you really are transported back to that time and place… [Choo has] captured, in a very atmospheric way, the time period and the superstitions [of colonial Malaysia in the 1930s]. It’s a pretty wonderful book.” —Nancy Pearl, NPR’s Morning Edition

“Richly complex…Gorgeous…Transport[s] us into a colonial world we more often see from the view of the occupier, in this transcendent tale about twins who share no blood, mythology and superstition, sibling rivalry, loyalty, forbidden love and identity.” —San Francisco Chronicle

“A mesmerizing tale of murder, romance, and superstition….So vividly told, you can practically smell the oleander blossoms outside Acton’s house. This Night Tiger is worth a prowl.” —USA Today

“A book for fans of Isabel Allende and for those who love a murder mystery with a beautiful backdrop.” —Glamour

“Fans of Isabel Allende will likely soar through Yangsze Choo’s The Night Tiger at a breakneck pace, so you might want to clear your schedule before sitting down to read it.” —PopSugar

"So engrossing you could spend a day reading this lush historical novel without staring at your phone once... A sweeping novel with something for everyone — and incredible writing." —Refinery29

“A sumptuous garden maze of a novel that immerses readers in a complex, vanished world…Choo weaves her research in with a feather-light touch, and readers will be so caught up in the natural and supernatural intrigue that the serious themes here about colonialism and power dynamics, about gender and class, are absorbed with equal delicacy.” —Kirkus (starred review)

"A work of incredible beauty...Astoundingly captivating and striking in its portrayal of love, betrayal, and death, The Night Tiger is a transcendent story of courage and connection." —Booklist (starred review)

“[Choo] presents complex characters and multilayered stories in a vivid setting that coalesce into a richly evocative and mesmerizing tale in which myths and folklore intertwine in daily life. For fans of Kate Mosse or Isabel Allende.” —Library Journal

“Yangsze Choo’s lush writing will appeal to all kinds of readers.” —HelloGiggles

“…A fascinating and compelling story, deftly told. A story that is interesting both culturally and historically, while also being an intensely personal exploration of two very different people struggling to find their way in a difficult world that has very stringent expectations of them with little or no room for failure. The characters are both recognizable and memorable, and the resolution…will keep readers guessing and turning the pages until the very last one.” —Los Angeles Public Library

1. The novel’s title evokes the story of the weretiger, “a beast who, when he chooses, puts on a human skin and comes from the jungle into the village to prey on humans.” What is the significance of that Malayan folktale in the novel? What does it represent for the different characters?

2. Discuss the structure of the novel, alternating between Ren’s and Ji Lin’s perspectives. How do their narrative styles and worldviews compare? Do you prefer one to the other? How would the novel have been different had it only been from one perspective?

3. Discuss Ren’s relationship with Dr. MacFarlane. Does Ren’s desire to bring the finger to his former master’s grave come from a place of love or fear? How is Ren’s life shaped by the masters for whom he works, and how does he determine his own fate?

4. As a surgeon in Batu Gajah, William Acton straddles two worlds, that of the locals and that of the foreigners. What is his relationship to the local people, specifically the young women he sleeps with? Do you think his impact on the community is ultimately positive or negative? What does this novel have to say about race and class more generally?

5. Ji Lin is a more talented student than her stepbrother, Shin, but because she is a girl, she isn’t allowed to continue on to medical school with him. How does this novel portray gender dynamics in colonial Malaya? How do Ji Lin, Lydia, and the other women in the novel either conform to or rebel against societal expectations? What parallels do you see with today’s world?

6. At the beginning of the novel, Ji Lin leads two different lives—one as a dressmaker’s apprentice and one as “Louise,” a dance-hall instructor. What are the pros and cons of each role? Does she find a way to reconcile these two sides of herself by the end of the novel?

7. Ji Lin reflects, “When people talked about being lucky, perhaps they simply wanted to feel powerful, as though they could manipulate fate.” Discuss the role of superstition in this novel, in which the supposed luck of certain numbers in Chinese tradition motivates many of the characters. What about in your own life? Do you consider yourself to be superstitious?

8. While speaking with Ji Lin about the other Confucian Virtues, Yi notes, “there’s something a bit wrong with each of us.” How do each of these characters—Ji Lin (knowledge), Ren (humanity), Shin (integrity), Yi (righteousness), and William/Lydia (ritual)—stray from their namesake values? At the end of the novel, are they more “right” or “wrong”?

9. In Chinese culture, the five Confucian Virtues are considered a matched set. Ji Lin reflects: “I had the odd fancy that the five of us were yoked by some mysterious fate. Drawn together, yet unable to break free, the tension made a twisted pattern. We must either separate ourselves, or come together.” Discuss the tension between independence and dependence for these characters.

10. In his conversations with Ji Lin, Yi hints that the Confucian Virtue Li, meaning order or ritual, has been disrupted. What are some examples from the novel of characters, relationships, and other elements that are seemingly out of order or unconventional?

11. Discuss Ji Lin’s relationships with the men in her life. How do her experiences at the dance hall shape her views of men, in particular Shin? At the end of the novel, she wonders, “Had I managed to catch up to Shin, or had he, by playing a cool and patient game, ensnared me instead?” What does she mean, and what do you think the answer is? Do you think Ji Lin and Shin will ultimately get married?

12. Why do you think Yi disappears from Ji Lin’s and Ren’s lives at the end of the novel? What previously unfinished business does he complete? Discuss how the supernatural twines through this novel. Do you believe that the dead can continue to communicate with the living, as Yi does?

13. Although Lydia is proven to be a murderer, she also works hard to improve the lives of Malayan women. Does her charity work at all redeem her in your eyes? Do you think she is in part a victim of her circumstances?

14. The novel ends with Ji Lin, Shin, Ren, Ah Long, and Rawlings all headed to Singapore. What do you think the future holds for them? Are you glad the ending leaves open the possibility of a sequel?