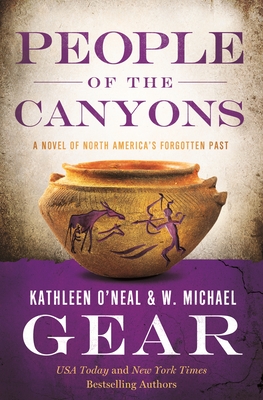 People of the Canyons

In People of the Canyons, award-winning archaeologists and New York Times and USA Today bestselling authors Kathleen O'Neal Gear and W. Michael Gear bring us a tale of trapped magic, a tyrant who wants to wield its power...and a young girl who could be the key to save a people.

In a magnificent war-torn world cut by soaring red canyons, an evil ruler launches a search for a mystical artifact that he hopes will bring him ultimate power—an ancient witch’s pot that reputedly contains the trapped soul of the most powerful witch ever to have lived.

The aged healer Tocho has to stop him, but to do it he must ally himself with the bitter and broken witch hunter, Maicoh, whose only goal is achieving one last great kill.

Caught in the middle is Tocho’s adopted granddaughter, Tsilu. Her journey will be the most difficult of all for she is about to discover terrifying truths about her dead parents.

Truths that will set the ancient American Southwest afire and bring down a civilization.


Praise For People of the Canyons: A Novel of North America's Forgotten Past…

"The Gears surround their characters with magnificent vistas and dress them in fantastic costumes that reveal their natures, creating a setting that is wild, beautiful, and ever-changing. This will be a treat for fans of historical fiction and historical fantasy." - Booklist

“A magnificent, sweeping world—America, circa 7300 b.c.—that is so real you can almost breathe in the air of it…This is a novel that will stay with you for years—I guarantee it.”—Douglas Preston, New York Timesbestselling author, on People of the Raven

“An epic novel that combines the cultural history of Cahokia with the fast-paced narrative of a thriller.”—New York Journal of Books on People of the Morning Star

“The most convincing reconstruction of prehistory I have yet read.”—Morgan Llywelyn, author of Lion of Ireland, on People of the Earth

“Rich in cultural detail...Both longtime fans and newcomers will be satisfied. Another fine entry in an ambitious, long-running series.”—Kirkus Reviews on People of the Longhouse

“Blended with the carefully drawn suspense of court intrigues, colorful characters and sharp plot twists, this is a terrific tale.”—Publishers Weekly on People of the Thunder

“Drawing on their backgrounds in archaeology, the Gears vividly recreate Paleolithic America in this enchanting and instructive novel.” —Publishers Weekly on People of the Nightland

W. Michael Gear, who holds a master's degree in archaeology, has worked as a professional archaeologist since 1978. He is currently principal investigator for Wind River Archaeological Consultants. With his wife, Kathleen O’Neal Gear, he has written the international and USA Today bestselling North America's Forgotten Past Series (including People of the Songtrail, People of the Morning Star, Sun Born, Moon Hunt, among others); and Anasazi Mystery Series.
Loading...
or support indie stores by buying on