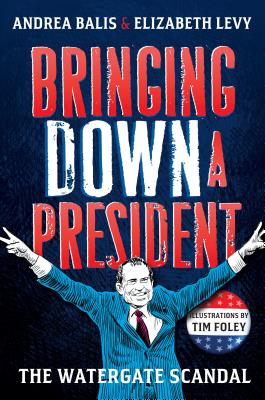 Bringing Down A President

A middle-grade retelling of Richard Nixon's downfall, Bringing Down A President: The Watergate Scandal is an inventive and timely look at one of the biggest scandals to ever rock our nation by Andrea Balis and Elizabeth Levy, featuring graphic novel style illustrations by Tim Foley.

Comprised almost completely of primary source quotes (good thing Nixon's recorder was on) and interspersed with contextual narrative, this captivating account of the trials and tribulations of the Nixon Administration has been rendered screenplay style offering an extraordinarily immediate narrative of one of America's most turbulent eras.


Praise For Bringing Down A President: The Watergate Scandal…

*"This valuable book reminds us that we can learn from the lessons of history and so avoid reprising the dark days of this national nightmare." —Booklist, starred review

Elizabeth Levy is the award-winning author of over 100 fiction and non-fiction books for children and young adults. She is known for the humor and research that she brings to her subjects, from studying stand-up comedy for My Life as A Fifth Grade Comedian, to working with renowned historians for America's Funny but True History and If You Were There When They Signed the Constitution.

I grew up in Buffalo, New York. I loved to daydream, and through my fantasies I learned a lot about good writing. I had a crush on Elvis, and I made up what he would say to me. When I became a writer as an adult, I could make my daydreams almost come true. I put Elvis in several of my books. Kids have sent me pictures of Fletcher as Elvis. Principals have even dressed as Elvis when I visited their school.

I went to Brown University where I majored in history. After I graduated, I came to New York City and worked for ABC-TV and Radio, and then for Senator Robert Kennedy. My first book was written shortly after Senator Kennedy’s death. It was called The People Lobby. I wanted teenagers to know how exciting politics can be. After that, I began writing mysteries and novels. I have been writing and living in New York ever since. At certain times of the year, I can be found out at Shea Stadium watching, the New York Mets. And of course, I still daydream. Now I daydream that they will win the World Series again.

Dr. Andrea Balis is a faculty member in the history department of John Jay College, City University of New York. Her specialization is twentieth century political history. She has also written extensively for the theater, and worked as a director. She is the author of two books for young people, What Are You Using: A Guide for Birth Control for Teenagers and a novel, PJ.

Tim Foley was born in Flint, Michigan, and since attending college at the Kendall School of Design, has made his home in Grand Rapids on the west side of the state. A freelance illustrator for the past three decades, his work has appeared in magazines and newspapers around the world and books have included many titles in the bestselling young adult "Who Was" biography series, as well as several adult coloring books.
Loading...
or
Not Currently Available for Direct Purchase