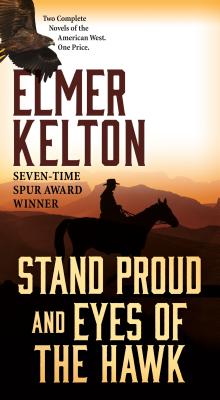 Stand Proud and Eyes of the Hawk

Elmer Kelton's Stand Proud and Eyes of the Hawk are two novels of fierce men tested by the Old West, written by one of the most critically acclaimed writers of the American west and offered at one low price.

Frank Claymore is cantankerous, stubborn, and intolerant—just the qualities that make him a success as an open-range cattle rancher on the West Texas frontier. Stand Proud follows Claymore from the time of the Civil War to the dawn of the twentieth century—through marriage, births, deaths, and a creeping change in the society that once hailed him as a hero, and which later has him condemned as a despoiler and tried for murder.

Eyes of the Hawk

Thomas Canfield descends from a line of Texas’s earliest settlers. A proud man with a fierce-eyes stare, he inspires the Mexicans of Stonehill, Texas to call him el gavilan—“the hawk.” When Branch Isom—an insolent, dangerous newcomer—seeks to build his fortune at Canfeild’s expense, an all-out feud ensues, hurtling the town toward a day of reckoning that will shake the entire town to its very roots.


Praise For Stand Proud and Eyes of the Hawk: Two Complete Novels of the American West…

“Voted ‘the greatest Western writer of all time’ by the Western Writers of America, Kelton creates characters more complex than L’Amour's.” —Kirkus Reviews

“You can never go wrong if .. . you pick up a title by Elmer Kelton.” —American Cowboy

“One of the best.” —The New York Times

“A genuine craftsman with an ear for dialogue and, more importantly, an understanding of the human heart.” —Booklist

Elmer Kelton (1926-2009) was the award-winning author of more than forty novels, including The Time It Never Rained, Other Men’s Horses, Texas Standoff and Hard Trail to Follow. He grew up on a ranch near Crane, Texas, and earned a journalism degree from the University of Texas. His first novel, Hot Iron, was published in 1956. Among his awards were seven Spurs from Western Writers of America and four Western Heritage awards from the National Cowboy Hall of Fame. His novel The Good Old Boys was made into a television film starring Tommy Lee Jones. In addition to his novels, Kelton worked as an agricultural journalist for 42 years. He served in the infantry in World War II. He died in 2009.
Loading...
or
Not Currently Available for Direct Purchase