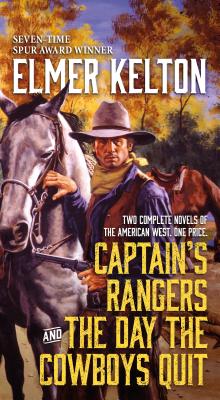 Captain's Rangers and The Day the Cowboys Quit (Mass Market)

With Captain's Rangers and The Day the Cowboys Quit, this omnibus by legendary Western writer Elmer Kelton offers two novels of the American West at one low price

In 1875, nearly forty years after the Mexican War, Mexicans and Texans are still spilling blood over ownership of the Nueces Strip—a hot, dry stretch of coastal prairie that bushwackers and horse thieves have turned into a lawless hell. Captain L.H. McNelly, a complex and determined Confederate veteran, is brought into the Nueces Strip for one purpose: to keep the peace. His measures are harsh and controversial, but McNelly wasn’t sent to be popular. In this boiler pot of killing and racial hatred, however, even his methods may not be enough to bring lasting peace.

The Day the Cowboys Quit

1833. Canadian River cowboy country is changing as a different breed moves in—big outfits backed by Eastern syndicates and run by power-hungry “managers” who figure to make a profit, even if it means crowding a cowboy too far. Wagon boss Hugh Hitchcock tries to keep the peace between rancher and cowboy. But when the ranchers steal his cattle, lynch his friend, and hire a back shooter to put him in his grave, he joins the fight himself. They may take everything he has, but they cannot touch his pride—or his willingness to fight to the bloody end.

Praise For Captain's Rangers and The Day the Cowboys Quit: Two Complete Novels of the American West…

“One of the greatest and most gifted of Western writers.”
—Historical Novel Society

“Voted ‘the greatest Western writer of all time’ by the Western Writers of America, Kelton creates characters more complex than L’Amour's.”
—Kirkus Reviews

“You can never go wrong if . . . you pick up a title by Elmer Kelton.”
—American Cowboy

“A genuine craftsman with an ear for dialogue and, more importantly, an understanding of the human heart.”
—Booklist