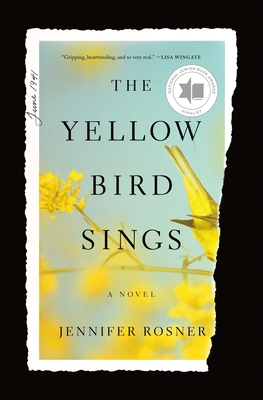 Jennifer Rosner is the author of If A Tree Falls: A Family's Quest to Hear and Be Heard, a memoir about raising her deaf daughters in a hearing, speaking world. Her children's book, The Mitten String, is a Sydney Taylor Book Award Notable. Jennifer's writing has appeared in the New York Times, The Massachusetts Review, The Forward, Good Housekeeping, and elsewhere. She lives in western Massachusetts with her family. The Yellow Bird Sings is her debut novel and is being published around the world.

1. What is the significance of Shira’s bird? How does it aid her? Do you think its original color, yellow, is important or telling? In what ways does the bird’s evolution mirror or not mirror Shira’s?

2. In the barn, Różahas to keep Shira—five years old and a musical prodigy—silent and still. What are her most effective strategies? Do you think she would have an easier time if Shira was younger or older?

3. When Róża asks Krystyna outright why she is helping them, Krystyna responds, “In God’s eyes your child is no different than mine. She deserves every chance to live.” What are Krystyna’s motivations for harboring Róża and Shira and, later, for arranging Shira’s transport to the convent? Do you think Krystyna knows of Henryk’s advances on Róża? If so, why doesn’t she send Róża and Shira away sooner?

4. How would you describe the relationship between Henryk and Róża? Does it change over time? From our twenty-first-century perspective, would we call it rape? Would Róża? Do you think she has any agency in their relationship? Is it still possible to think of Henryk’s decision to protect Róża and Shira, despite the risk, as heroic?

5. Judaism is fairly absent from the novel, despite it being the reason Róża’s and Shira’s lives are in danger. Why do you think that is the case? Why does Róża rarely reference her religion?

6. In the barn, Shira eats her own portion of food and whatever her mother saves for her. She also eats the special foods Krystyna gives her on outings. How does hunger, satiety, and the storing of food play out later, specifically with regard to her feelings of guilt?

7. In the convent, Zosia is permitted to speak but stays largely silent. As sheg rows more comfortable playing the violin, she comes to think of the sound as “safer even than silence.” What does the author mean by that phrase? Discuss the importance of music in the novel. What can music express that words (or silence) can’t?

8. Although the nuns dye Zosia’s hair and teach her Catholicism, she still feels like an outsider. Discuss the various ways in which the girls, the nuns, and Pan Skrzypczak treat her otherness, and the forms of prejudice and kindness she encounters. Do you think they suspect that she is Jewish?

10. At the camp in the woods, Róża is heartbroken to realize that other families remained intact: “Here are mothers, in the woods, in winter, who did not part from their children. They kept them with them and their children survived.” Do you think she still made the right decision in sending Shira away? What would you have done in her place?

11. Różacannot bear to hold Issi, a young child at the camp. Issi’s mother doesn’t understand, and the narrator explains,“What is whole does not comprehend what is torn until it, too, is in shreds.”Do you agree that there is an inevitable limit to our empathy? Can novels like The Yellow Bird Sings expand our capacity to empathize? If so, how?

12. Over the course of the novel, Shira becomes Zosia and then Tzofia. What does she lose with each name change? In her author’s note, Jennifer Rosner writes of the hidden children who inspired her novel: “If you remember me, if there is anyone out there who recognizes me and can tell me about my family, my name, then I might discover my history, my roots: my self. For refugees of current wars and violence, children displaced and torn from their families, this question echoes on.” Do you agree that Shira’s experiences continue to resonate today, with the global refugee crisis?

13. Why do you think Róża decides not to try to have more children once she moves to America? Do you think that was a selfish decision? Was it fair to Aron to keep it from him, or does she have the right to make that choice for herself?

14. What did you think of the novel’s ending? Do you believe that Shira and Róża will have a future together?