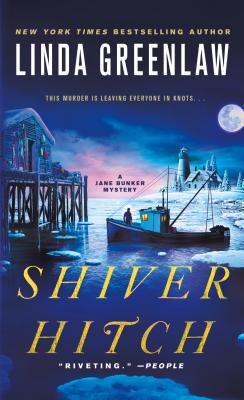 In Linda Greenlaw's Shiver Hitch, Jane Bunker is back in New England and life—and death—will never be the same. . .

Jane Bunker thought she’d escaped the pollution, noise, and crime of urban life when she left her job as a Miami homicide detective and moved back to the idyllic town of Green Haven, Maine. But now that she’s working as a marine insurance investigator, Jane is about to discover that murder can happen in lovely little fishing villages, too.

When Jane is called to the remote Acadia Island to assess the damages from a house fire, she also finds a badly burned body in the charred rubble. It turns out that the victim is the owner of the house, who just happens to be one of the most wealthy—and hated—women in town. As Jane’s investigation deepens, it’s clear that someone went to a lot of trouble to make her death look like an accident. Meanwhile, a vicious nor’easter is making its way up the coast. Can Jane manage to solve the case before the storm puts a deep freeze on the investigation. . .and puts her in the path of a cold-blooded killer?

The Jane Bunker series is: