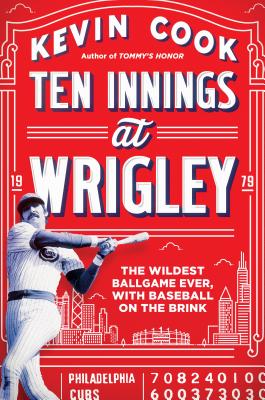 The dramatic story of a legendary 1979 slugfest between the Chicago Cubs and the Philadelphia Phillies, full of runs, hits, and subplots, at the tipping point of a new era in baseball history

It was the highest-scoring ballgame in a century, and much more than that. Bringing to life the run-up and aftermath of a contest The New York Times called “the wildest in modern history,” Cook reveals the human stories behind the game—and how money, muscles and modern statistics were about to change baseball forever.


Praise For Ten Innings at Wrigley: The Wildest Ballgame Ever, with Baseball on the Brink…

Kevin Cook has written more than five books on sports and the people who play them, including Electric October, Tommy’s Honor and The Dad Report. He is a former senior editor at Sports Illustrated who has written for The New York Times, Men’s Journal, GQ, Playboy, Smithsonian, and many other publications. He has appeared on CNN, ESPN, and Fox TV. An Indiana native, he now lives in Northampton, Massachusetts.
Loading...
or support indie stores by buying on