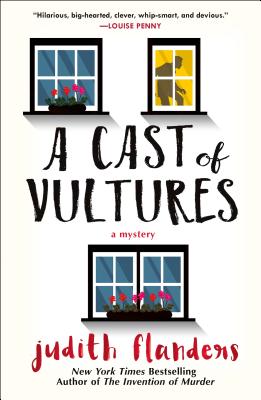 A Cast of Vultures

There was every possibility that I was dead, and my brain hadn’t got the memo. Or maybe it was that I wished I were dead. On reflection, that was more likely.

Usually clear-headed editor Samantha Clair stumbles through her post-book-party morning with the hangover to end all hangovers. But before the ibuprofen has even kicked in, she finds herself entangled in an elaborate saga of missing neighbors, suspected arson, and strange men offering free tattoos.

By the time the grisly news breaks that the fire has claimed a victim, Sam is already in pursuit. Never has comedy been so deadly as she faces down a pair from Thugs ’R’ Us, aided by nothing more than a Scotland Yard boyfriend, a stalwart Goth assistant, and an unnerving knowledge of London’s best farmer’s markets.


Praise For A Cast of Vultures: A Mystery (Sam Clair #3)…

“Carefully mixed up and served, with a lot of humor.” —The Mercury News (San Jose)

“From the first page you want Samantha Clair to be your new best friend.” —Daily Mail (UK)

JUDITH FLANDERS is an international bestselling author and one of the foremost social historians of the Victorian era. Her book Inside the Victorian Home was shortlisted for the British Book Awards History Book of the Year. Judith is a frequent contributor to the Daily Telegraph, Guardian, Spectator, and the Times Literary Supplement. She lives in London.
or
Not Currently Available for Direct Purchase