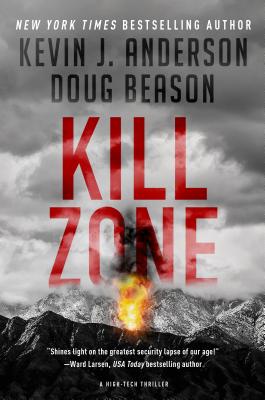 Deep within a mountain in Albuquerque, New Mexico, a Cold War-era nuclear weapons storage facility is being used to covertly receive more than 100,000 tons of nuclear waste stored across the US. Only Department of Energy employee, Adonia, and a few others including a war hero, a senator, and an environmental activist, are allowed access to perform a high-level security review of the facilities. But Hydra Mountain was never meant to securely hold this much hazardous waste, and it has the potential to explode, taking with it all of Albuquerque and spreading radioactivity across the nation.

This disaster situation proves all too possible when a small plane crashes at a nearby military base, setting off Hydra’s lockdown and trapping Adonia and her team in the heart of the hazardous, waste-filled mountain. Now, the only direction for them to go is deeper into the mountain, through the tear gas and into a secretive area no one was ever supposed to know about.

“A wonderfully imagined, terrifying scenario that reeks of plausibility. It’s a game within a game—a thrilling, dangerous quest for the unspeakable.” —Steve Berry, New York Times bestselling author of The Art of War

Kevin J. Anderson has written dozens of national bestsellers and has been nominated for the Hugo Award, the Nebula Award, the Bram Stoker Award, and the SFX Readers' Choice Award. His critically acclaimed original novels include the ambitious space opera series The Saga of Seven Suns, including The Dark Between the Stars, as well as Wake the Dragon epic fantasy trilogy, the Terra Incognita fantasy epic with its two accompanying rock CDs. He also set the Guinness-certified world record for the largest single-author book signing, and was recently inducted into the Colorado Authors’ Hall of Fame.

Doug Beason, PhD is a Nebula Award finalist whose work has appeared in numerous magazines and anthologies including The Wall Street Journal and Journal of Computational Physics. His book Science and Technology Policy for the post-Cold War: A Case for Long-Term Research was used as a textbook at National War College and the Air War College. A Fellow of the American Physical Society, Beason has worked on the White House staff for the President's Science Advisor under both the Bush and Clinton Administrations as the key staffer for space science and technology. As the Associate Laboratory Director for Threat Reduction at the Los Alamos National Laboratory, he was responsible for the programs and people that reduced the global threat of weapons of mass destruction. A graduate of the USAF Academy, Doug holds a PhD in Physics, and before moving to Los Alamos, completed a twenty-four year career as an Air Force officer, retiring as a Colonel. He has lived in Canada, the Philippine Islands, and Okinawa.
Loading...
or
Not Currently Available for Direct Purchase