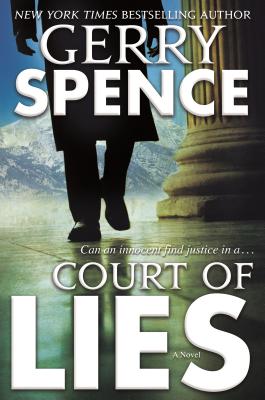 From Gerry Spence, one of America’s greatest trial attorneys and the New York Times bestselling author of How to Argue and Win Every Time, comes an explosive courtroom thriller of murder, passion, and the twists and treachery of law and justice.

Gerry Spence is one of the greatest trial lawyers of our time. He has not lost a jury trial in fifty years and has never lost a criminal or a capital case. He has also represented many celebrated defendants and appeared on countless national TV talk shows.

Spence now presents us with beautiful Lillian Adams, who is going on trial for the murder of her wealthy husband before Judge John Murray. The prosecutor, Haskins Sewell, however, is consumed by political ambition. He plans to advance his own career by framing Lillian for murder one and by railroading the judge into prison.

A fast-paced, up-all-night courtroom thriller, Court of Lies is also a harsh indictment of today’s legal system. The country has 2.3 million people behind bars and 7.5 million more on parole or probation. A major reason for so much mass incarceration is the dominance of politically motivated prosecutors, who over-sentence defendants for the sake of winning votes in their own elections and advancing their careers.


Praise For Court of Lies: A Novel…

“Gerry Spence electrified the courtroom every time he argued a case. Now, the legendary lawyer makes his crime novel debut, and lightning strikes again. Court of Lies is a stunning drama filled with characters as smart and surprising as Spence himself, and brilliant plotting that twists and turns to an ending you’ll never see coming. I loved it!”
—Linda Fairstein, New York Times bestselling author of Killer Look

“Witty and fast-paced, this novel is filled with tension, suspense and sharply drawn characters. And the courtroom drama sizzles!”
—William Martin, New York Times bestselling author of Bound for Gold

“Classic noir. A rollercoaster ride through a courtroom case by one of America’s foremost lawyers. Terrific book—can’t wait for the movie.”
—David Black, winner of two Edgars, a dozen Emmys and Writers Guild nominations and awards, and author of Fast Shuffle

“Its courtroom scenes have the ring of truth (no surprise, considering the author’s long career as a prosecutor and defense attorney), as do the characters . . . [A]n easy novel to read and a difficult one to put down.”
—Booklist

“Court of Lies is best filed under courtroom noir, a la Michael Connolly’s superb Lincoln Lawyer series featuring Mickey Haller. Spence’s prose is as polished as his final summation to the jury, helping to make the case that he belongs alongside John Grisham and Scott Turow as the foremost legal thriller writers of our time.
—Sunday Providence Journal

Gerry Spence has been a trial attorney for more than five decades and proudly represents "the little people." He has fought and won for the family of Karen Silkwood, defended Randy Weaver at Ruby Ridge, and represented hundreds of others in some of the most notable trials of our time. He is the founder of Trial Lawyer's College, a nonprofit school where, pro bono, he teaches attorneys for the people how to present their cases and win against powerful corporate and government interests. He is the author more than a dozen books, including The New York Times bestseller How to Argue and Win Every Time, From Freedom to Slavery, Give Me Liberty, and The Making of a Country Lawyer, and is a nationally known television commentator on the famous trials of our time. He lives in Jackson Hole, Wyoming.
Loading...
or
Not Currently Available for Direct Purchase