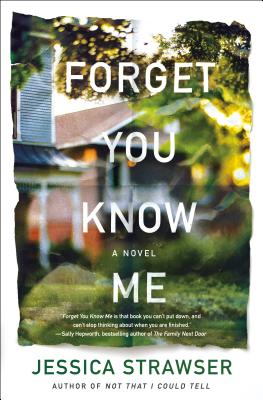 Forget You Know Me

The next “masterful” (Publishers Weekly) novel from "the gifted Jessica Strawser" (Adriana Trigiani), hailed as “immensely satisfying” (Kathleen Barber) and “that book you can’t put down” (Sally Hepworth). A video call between friends captures a shocking incident no one was supposed to see.

The secrets it exposes threaten to change their lives forever.

Molly and Liza have always been enviably close. Even after Molly married Daniel, the couple considered Liza an honorary family member. But after Liza moved away, things grew more strained than anyone wanted to admit—in the friendship and the marriage.

When Daniel goes away on business, Molly and Liza plan to reconnect with a nice long video chat after the kids are in bed. But then Molly leaves the room to check on a crying child.

What Liza sees next will change everything.

Only one thing is certain: Molly needs her. Liza drives all night to be at Molly’s side—but when she arrives, the reception is icy, leaving Liza baffled and hurt. She knows there’s no denying what she saw.

In disbelief that their friendship could really be over, Liza is unaware she’s about to have a near miss of her own.

And Molly, refusing to deal with what’s happened, won’t turn to Daniel, either.

But none of them can go on pretending. Not after this.

Forget You Know Me is a “twisty, emotionally complex, powder keg of a tale” (bestselling author Emily Carpenter) about the wounds of people who’ve grown apart. Best friends, separated by miles. Spouses, hardened by neglect. A mother, isolated by pain.

One moment will change things for them all.


Praise For Forget You Know Me: A Novel…

Praise for Forget You Know Me:

"Gorgeously written, suspenseful and full of characters who feel like old friends. I loved this book and didn't want it to end." — Michele Campbell, author of It’s Always the Husband and She Was the Quiet One on Forget You Know Me

“It’s been a long time since I’ve been so lost in a book that when I looked up I had to remind myself what day it was. I’m delighted to say that this happened several times as I read this book. From the very first page of Forget You Know Me I was putty in Strawser’s hands. From her portrayal of the changing nature of adult friendship to the seemingly harmless secrets we keep in marriage, Forget You Know Me is that book you can’t put down, and can’t stop thinking about when you are finished.” —Sally Hepworth, USA Today bestselling author of The Family Next Door

"A fantastic, tautly-paced novel that will have you racing to unravel its many questions and half-truths." —Liz Fenton & Lisa Steinke, bestselling authors of Girls' Night Out

"Friendships crack, marriages erode, and dangerous deceits rise to the surface in this twisty, emotionally complex, powder keg of a tale." —Emily Carpenter, bestselling author of Burying the Honeysuckle Girls and Every Single Secret

"A taut and immensely satisfying novel of domestic suspense. Come for the sinister premise, stay for the insightful portrayals of a friendship crumbling apart, a marriage strained to its breaking point, and at least one character who finds themself suddenly—and dangerously—in over their head." —Kathleen Barber, bestselling author of Are You Sleeping

"Strawser is a clear master of the craft." - Booklist

"[An] engrossing, taut tale." —Publisher's Weekly on Not That I Could Tell

"Full of slow-burning intrigue, Strawser's second novel will appeal to fans of Liane Moriarty's Big Little Lies and Jennifer Kitses' Small Hours." —Booklist on Not That I Could Tell

"The characters are unique, engaging, and relatable and the ending is both surprising and poignant. Fans of Liane Moriarty will adore Jessica Strawser; she’s a huge talent!" —Kate Moretti, New York Times bestselling author of The Blackbird Season on Not That I Could Tell

"Fans of smart women's fiction mixed with a fast-paced plot should not miss this startling first novel." —Library Journal on Almost Missed You

"Almost Missed You is a skillful, insightful debut: a deft exploration of the mysteries of marriage, the price we pay for our secrets, and just how easy it is to make the worst choices imaginable." — Chris Bohjalian, New York Times bestselling author of The Sandcastle Girls and Midwives

“An emotional powerhouse of a novel…Strawser’s tale of guilt, blame, redemption, and forgiveness is a must read for anyone who enjoys a well-told, compelling exploration of the human heart.” —Garth Stein, New York Times bestselling author of A Sudden Light and The Art of Racing in the Rain on Almost Missed You

"Almost Missed You is the sensational debut novel by the gifted Jessica Strawser who has expertly woven a tale of a marriage in crisis with elements of daring, danger, mystery and secrets that will surprise and delight you. This is a rich read which will keep you turning pages long into the night. Glorious!" — Adriana Trigiani, New York Times bestselling author of All the Stars in the Heavens