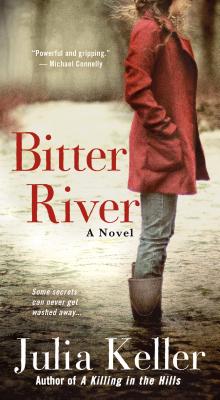 “Fans of character-driven suspense with strong female protagonists will love Bitter River, the latest in Julia Keller's Bell Elkins series. Prosecutor and divorced mom Elkins is questioning her move back from Washington D.C. to her impoverished West Virginia hometown, as she investigates the murder of a teenage girl who seemed to be one of the town's success stories. Meanwhile, forces from outside the town bring an unforeseen threat to Bell's new relationship, and ultimately to Bell herself. Suspenseful and satisfying!”
— Carol Schneck Varner, Schuler Books & Music, Okemos, MI
View the List

In the next stunning novel from Pulitzer Prize-winning Julia Keller, following the popular A Killing in the Hills, a pregnant teenager is found murdered at the bottom of a river

Phone calls before dawn are never good news. Especially when you’re a prosecuting attorney in a small Appalachian town. Still, Bell Elkins is not prepared for this: sixteen-year-old Lucinda Trimble’s body has been found at the bottom of Bitter River. And Lucinda didn’t drown—she was dead before her body ever hit the water.

With a case like this, Bell knows the coming weeks are going to be tough. But that’s not all Bell is coping with these days. Her daughter is now living with Bell’s ex-husband, hours away. Sheriff Nick Fogelsong, one of Bell’s closest friends, is behaving oddly. And a face from her past has resurfaced for reasons Bell can’t quite figure. Searching for the truth, both behind Lucinda’s murder and her own complicated relationships, is leading Bell down a dangerous path. . .will it lead to a dead end?