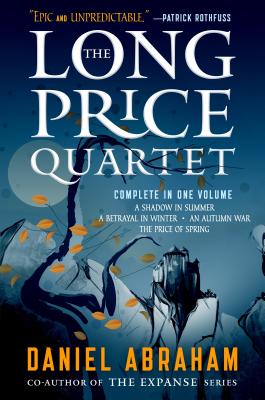 The Complete Quartet (A Shadow in Summer, A Betrayal in Winter, An Autumn War, The Price of Spring)

For the first time in one volume, the unforgettable epic fantasy The Long Price Quartet by Daniel Abraham, award-winning coauthor of The Expanse series.

In a world of ancient empires and immortal magics, one man stands at the crossroads of history.

The aggressively expansionist Galt empire has already conquered lands across a huge continent. But the cities of the Khaiem resist Galt's power with the andat creatures of magic with godlike powers. But magic and treacherous politics have brought a bitter harvest of violence and sorrow.

Otah Machi, caught between ancient wonders and a modern empire, has survived more than most men endure in two lifetimes. He is the culmination of a complex inheritance, and his own existence is the fulcrum around which the wheels of epic history rotate through achingly poignant cycles of life and death, love and betrayal.

Now, when the world seems utterly lost, all depends on Otah, and the lost loves and found family he has desperately hoped to protect from the tragedy that beckons. If they can summon the courage and power to forgive and resist darkness, all their hopes could be salvaged—along with their world.

"There is much to love in The Long Price Quartet. It is epic in scope but character centered, with a setting both unique and utterly believable. The storytelling is smooth, careful, and—best of all—unpredictable."—New York Times Bestselling Author Patrick Rothfuss

The Long Price Quartet includes:
1. A Shadow in Summer
2. A Betrayal in Winter
3. An Autumn War
4. The Price of Spring

Daniel Abraham has had stories published in the Vanishing Acts, Bones of the World, and The Dark anthologies, and has also been included in Gardner Dozois's Year's Best Science Fiction anthology.  He won the International Horror Writers Association award for best short fiction for his story “Flat Diane.” His books include The Long Price Quartet, starting with A Shadow in Summer. He lives in New Mexico with his wife and daughter.

Praise For The Long Price Quartet: The Complete Quartet (A Shadow in Summer, A Betrayal in Winter, An Autumn War, The Price of Spring)…

"A Shadow in Summer is a thoroughly engrossing debut novel from a major new fantasist."—George R.R. Martin

"A Betrayal in Winter is exactly the kind of book I love." —Brandon Sanderson

"Daniel Abraham will lead you into a strange, seductive world. Intricate, elegant, and almost hypnotically told, this tale of gods held captive will hold you captive." —Connie Willis, Hugo and Nebula Award–winning author

"Melancholy and near-perfect...a tale of forgiveness and catharsis that concludes this complex saga with mixed notes of sadness and hope." —Publishers Weekly, starred review, on The Price of Spring

"The characters are paying a price for the way their society has been constructed. And it’s very interesting to watch that price being paid, in all of its excruciating permutations."—Kirkus on An Autumn War

"Full of hope that men and women can be equal and that systems which degrade us can be changed." —Book Page on A Betrayal in Winter

"Impressive...fascinating and original. Readers looking for something new and a little offbeat will enjoy this book. —RT Book Reviews, four and half stars, on A Shadow in Summer