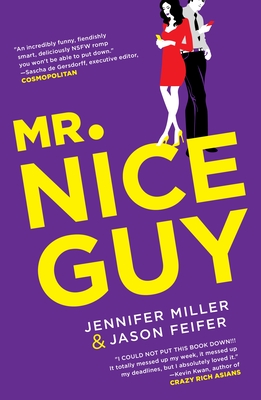 Named one of Cosmopolitan's Best Books of 2018

From the husband and wife writing duo Jennifer Miller and Jason Feifer comes Mr. Nice Guy, a funny and all too real comedy about the pursuit of success in life--and love--in today's working world.

Lucas Callahan, a man who gave up his law degree, fiancée and small-town future for a shot at making it in the Big Apple. He snags an entry-level job at Empire magazine, believing it’s only a matter of time before he becomes a famous writer. And then late one night in a downtown bar he meets a gorgeous brunette who takes him home...

Carmen Kelly wanted to be a hard-hitting journalist, only to find herself cast in the role of Empire's sex columnist thanks to the boys' club mentality of Manhattan magazines. Her latest piece is about an unfortunate—and unsatisfying—encounter with an awkward and nerdy guy, who was nice enough to look at but horribly inexperienced in bed.

Lucas only discovers that he’s slept with the infamous Carmen Kelly—that is, his own magazine’s sex columnist!—when he reads her printed take-down. Humiliated and furious, he pens a rebuttal and signs it, "Nice Guy." Empire publishes it, and the pair of columns go viral. Readers demand more. So the magazine makes an arrangement: Each week, Carmen and Lucas will sleep together... and write dueling accounts of their sexual exploits.

It’s the most provocative sexual relationship any couple has had, but the columnist-lovers are soon engaging in more than a war of words: They become seduced by the city’s rich and powerful, tempted by fame, and more attracted to each other than they’re willing to admit. In the end, they will have to choose between ambition, love, and the consequences of total honesty.

“I COULD NOT PUT THIS BOOK DOWN!!! It totally messed up my week, it messed up my deadlines, but I absolutely loved it.” —Kevin Kwan, author of Crazy Rich Asians

"Sharp and satisfying, this well-plotted, expertly characterized tale will have readers turning the pages quickly to get the latest dishy details." - Publishers Weekly

"Miller and Feifer hit all the beats of a satisfying rom-com while still managing to surprise... A fun and fast-paced look at the risk and value of real intimacy." - Kirkus

"A provocative story of sexual exploitation, relationships, and at its core, the simple desire to be wanted. With multiple story lines and a Sex in the City vibe, this book is perfect for those looking for a war-of-words, clash-of-worlds summer read." – Booklist

"A fun read that is sure to satisfy admirers of Sophie Kinsella and Meg Cabot." – Library Journal

"Consider this the ultimate rom-com: a mash-up of How to Lose a Guy in 10 Days, Sex and the City, and The Devil Wears Prada. Seriously, we dare you to not devour this comedy of errors-style romp of a workplace romance in one sitting." - Cosmopolitan

"It’s fun, it’s cute, and holy sh*t it is so refreshing to read a book about the publishing industry that ACTUALLY gets it totally right for once." - Betches

"In Mr. Nice Guy, one brave couple does what most of us would never dare: give brutally honest feedback about last night's sex. The result is an incredibly funny, fiendishly smart, deliciously NSFW romp you won't be able to put down." —Sascha de Gersdorff, Executive Editor, Cosmopolitan

"In their addictive comedy, Miller and Feifer have captured not just the heady mix of young ambition and uncertainty that many readers will recognize, but also New York City in a precise moment of transition, when one generation is fading but the next isn't quite ready (or willing) to take its place. We can all find a bit of ourselves in Mr. Nice Guy. For better or worse." —Neil Janowitz, Editorial Director, Vulture.com

"This pitch-perfect take on modern romance is far more than a guilty pleasure. It's also a timely battle of the sexes, taking aim at deep-seated assumptions about who wields the power—in the corner office, and in the bedroom." —Stacy London, host, What Not to Wear and Love, Lust or Run

"A juicy insider's tryst through the ever-shifting world of the glossy magazines." —Jo Piazza, author of The Knockoff

“Witty, sexy, sweet, and utterly engrossing, Mr. Nice Guy stakes out fresh battleground in the war of the sexes. With its twisty plot and fizzy cast of characters, this is a joy ride you can’t predict nor put down until the surprising end.” - Amy Scheibe, author of Fireproof Home for the Bride

"This is not your typical boy-meets-girl romance. In Mr. Nice Guy, after boy meets girl, he reads about their one-night stand in a sex column, writes a rebuttal, and goes viral. Naturally, they decide to sleep together every week and write dueling evaluations of their sexual encounters. It’s romantic, mysterious, and super fun." - Hello Giggles

Jennifer Miller is an author and journalist. Her debut novel, The Year of the Gadfly, was called "entirely addictive" (Glamour) and a "darkly comic romp” (The Washington Post). She writes frequently for The New York Times Styles section. She is married to Jason Feifer (her coauthor of Mr. Nice Guy), and they live in Brooklyn.

Jason Feifer is editor in chief of Entrepreneur magazine, host of the podcast Pessimists Archive, and previously worked as an editor at Men's Health, Maxim, Fast Company, and Boston. He is married to Jennifer Milller (his coauthor of Mr. Nice Guy) and they live in Brooklyn.
Loading...
or
Not Currently Available for Direct Purchase