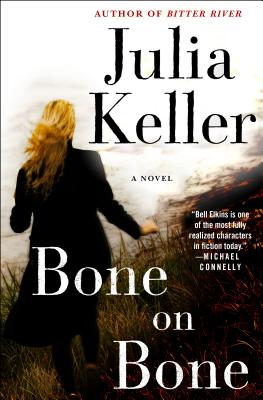 Bone on Bone, the next powerful chapter in Pulitzer Prize-winner Julia Keller's beloved Bell Elkins series, sends readers headlong into the thick of a mystery as young as today's headlines -- but as old as the mountains that hold these lives in a tight grip.

How far would you go for someone you love? Would you die? Would you kill? After a three-year prison sentence, Bell Elkins is back in Acker's Gap. And she finds herself in the white-hot center of a complicated and deadly case -- even as she comes to terms with one last, devastating secret of her own.

A prominent local family has fallen victim to the same sickness that infects the whole region: drug addiction. With mother against father, child against parent, and tensions that lead inexorably to tragedy, they are trapped in a grim, hopeless struggle with nowhere to turn.

Bell has lost her job as prosecutor -- but not her affection for her ragtag, hard-luck hometown. Teamed up with former Deputy Jake Oakes, who battles his own demons as he adjusts to life as a paraplegic, and aided by the new prosecutor, Rhonda Lovejoy, Bell tackles a case as poignant as it is perilous, as heartbreaking as it is challenging.

Julia Keller, winner of the Pulitzer Prize and former cultural critic at the Chicago Tribune, is the author of many books for adults and young readers, including A Killing in the Hills, the first book in the Bell Elkins series and winner of the Barry Award for Best First Novel (2013); Back Home; and The Dark Intercept. Keller has a Ph.D. in English literature from Ohio State and was awarded Harvard University’s Nieman Fellowship. She was born in West Virginia and lives in Ohio.

"Keller can spin a mystery plot with the best of them, but it’s her full-bodied characters and the regard they have for one another that really sets her crime fiction apart: a bride’s back-of-the-hand caress of her new husband’s cheek, and his response, is a moment that will linger in memory long after the crime is solved." - Booklist (starred review)

“This haunting, thought-provoking story proves Keller is one of a kind.” – Library Journal (starred review)

“A native West Virginian and a winner of the Pulitzer Prize while at the Chicago Tribune, Keller, with a winning blend of lyrical prose and realistic storytelling, again offers readers exceptional crime fiction and a harrowing portrait of the Mountain State. Adrift in poverty, anger and despair and awash in opiates, West Virginia casts a bleak shadow. But in Keller’s adroit, unblinking and humane approach, its profound humanity also shines through.” – Fredericksburg Free Lance-Star

“Compulsively readable and rich with psychological and social insight… Keller emphatically captures a community beset by hardship and caught in a downward spiral that she is determined to break.” – National Book Review