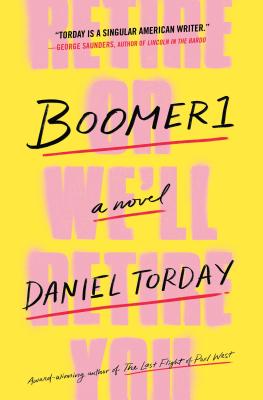 "Torday is a singular American writer with a big heart and a real love for the world. He has the rare gift for writing dynamic action scenes while being genuinely funny." —George Saunders

Told through the perspectives of Mark, Cassie, and Mark’s mother, Julia, a child of the '60s whose life is more conventional than she ever imagined, Boomer1 is timely, suspenseful, and in every line alert to the siren song of endless opportunity that beckons and beguiles all of us.


Praise For Boomer1: A Novel…

One of The Millions’ Most Anticipated Books of 2018

One of Entertainment Weekly's 20 Books to Read in September

"Torday is a singular American writer with a big heart and a real love for the world. He has the rare gift for writing dynamic action scenes while being genuinely funny." - George Saunders, author of Lincoln in the Bardo

"In this inventive, hilarious, and audacious book, Daniel Torday elucidates the deep ironies and ambivalences embedded in how we live now." - Dana Spiotta, author of Innocents and Others and National Book Critics Circle Award winner

“Boomer1 channels the riotous insecurity and injustice of our contemporary America into a frightening, hilarious, and all-too-plausible societal bildungsroman. Edgy and humane, this novel is live music for our screened-off world.” - Karen Russell, author of Swamplandia!

"Boomer1 is a dazzling new novel from one of America's premier writers." - Adam Johnson, Pulitzer Prize-winning author of The Orphan Master's Son

"Torday (The Last Flight of Poxl West) constructs a hilarious story about generational conflict brought to a boiling point...Torday’s wry examination of those attempting to survive in postrecession America is particularly poignant." - Publishers Weekly

"Torday’s writing is funny and insightful. He adeptly captures the current zeitgeist, where a tree that falls but is not captured on Instagram doesn’t make a sound." - The Nebraska Journal Star

"Refreshingly (if at times devastatingly) uncanny, funny, and clever." - The Millions

"Wry, humorous, ironic, and, at the same time, empathetic." - Authors 'Round the South

"Torday has some of the witty, neoteric, alternative-now chops of Don DeLillo...[his] narrative moves like a Clapton solo, fast and sinuous and haunting. And his black-humor story unfolds as naturally as a rainstorm." - Memphis Flyer

"Dialogue is stellar, and humor dances through everything like a countermelody." - Washington Independent Review of Books

"A thoughtful, taut, and engaging commentary on how social media can escalate personal angst into a terrorist act that turns deadly... Boomer1's knowing take on identity politics and generational turmoil will make many people smile. The novel is artfully written and well worth reading." - The Philadelphia Inquirer

DANIEL TORDAY is the Director of Creative Writing at Bryn Mawr College. An author and former editor at Esquire magazine, Torday currently serves as an editor at The Kenyon Review. His short stories and essays have appeared in Esquire, Glimmer Train, Harper Perennial’s Fifty-Two Stories, Harvard Review, The New York Times and The Kenyon Review.  Torday’s novella, The Sensualist, won the 2012 National Jewish Book Award for debut fiction.
Loading...
or
Not Currently Available for Direct Purchase