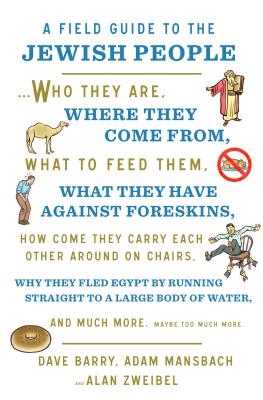 A Field Guide to the Jewish People

Who They Are, Where They Come From, What to Feed Them…and Much More. Maybe Too Much More

From three award-winning and bestselling humor writers comes a hilarious guide to everything you need to know about Jewish history, holidays, and traditions.

Why do random Jewish holidays keep springing up unexpectedly? Why are yarmulkes round? Who was the first Jewish comedian? What's "Christian humor" and have you ever even heard of that phrase? Who is "the Golem" and whom do you want it to beat up?

These baffling questions and many more are answered by comedy legends Dave Barry, Adam Mansbach, and Alan Zweibel, two-thirds of whom are Jewish. In A Field Guide to the Jewish People the authors dissect every holiday, rite of passage, and tradition, unravel a long and complicated history, and tackle the tough questions that have plagued Jews and non-Jews alike for centuries.

Combining the sweetness of an apricot rugelach with the wisdom of a matzoh ball, this is the last book on Judaism that you will ever need. So gather up your chosen ones, open a bottle of Manischewitz, and get ready to laugh as you finally begin to understand the inner-workings of Judaism.


Praise For A Field Guide to the Jewish People: Who They Are, Where They Come From, What to Feed Them…and Much More. Maybe Too Much More…

"An irreverent take on Jewish life, culture, and lore. No topic is off limits.... This is another zany book for Jews and those who love them." —Kirkus Reviews

“They're back again! However you say ‘three amigos’ in Yiddish, that's exactly what they are. They are like as wheatgrass shot of Jewish culture. If I was having a Bar Mitzvah, I would want to recite lines from this book. Everything I read from these three gives me Jewish envy. I laughed til I plotzed. Did I use that correctly?” —W. Kamau Bell, goyish comedian

Adam Mansbach is the #1 New York Times bestselling author of Go the F*** to Sleep and You Have to F****** Eat, as well as the California Book Award–winning novel The End of the Jews, a dozen other books, and the movie Barry. His work, which has been translated into more than forty languages, has appeared in The New Yorker, The New York Times Book Review, Esquire, and The Believer and on National Public Radio’s All Things Considered and This American Life.

An original Saturday Night Live writer, Alan Zweibel has won numerous Emmy and Writers Guild of America awards for his work in television, which also includes It’s Garry Shandling’s Show (which he co-created), Late Show with David Letterman, and Curb Your Enthusiasm. He collaborated with Billy Crystal on the Tony Award–winning play 700 Sundays, and he won the Thurber Prize for his novel The Other Shulman.
Loading...
or support indie stores by buying on