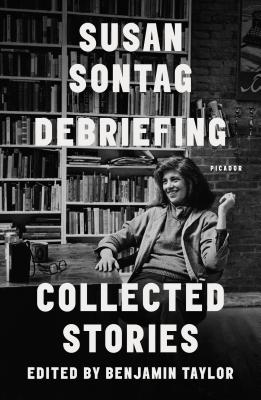 A collection of short fiction from Susan Sontag, the National Book Award-winning author of In America and Against Interpretation, and the renowned essayist praised as “one of our very few brand-name intellectuals” (The Yale Review).

An invaluable record of the creative output of one of the most inquisitive and analytical thinkers of the twentieth century at the height of her power, Debriefing collects all of Susan Sontag’s shorter fiction, a form she turned to intermittently throughout her writing life.

Ranging from allegory to parable to autobiography, these stories show Sontag wrestling with problems beyond the essayistic form, her more customary mode. Here, she catches fragments of life on the fly, dramatizes her private griefs and fears, and lets characters take her where they will. The result is a collection of remarkable brilliance, versatility, and charm. Sontag’s work has typically required time for people to catch up to it. These challenging works of literary art—made more urgent by the passage of years—await a new generation of readers.

“The cumulative effect of her writing is to stimulate the flow of argument. . .you might say she has diverted the mainstream; her private islands of thought now look like the territory on which we've always lived. . .She stands for what is articulate, independent, exploratory: for self as a work in progress. —Hilary Mantel, The Los Angeles Times Book Review

Susan Sontag is a powerful thinker, as smart as she's supposed to be, and a better writer, sentence for sentence, than anyone who now wears the tag 'intellectual.' —Adam Begley, The New York Observer

[Sontag is] one of our very few brand-name intellectuals. . .the bearer of the standard of high seriousness in a culture that has essentially capitulated to the easy lifting of the ironic mode or the ready clasp of pure entertainment. —Sven Birkets, The Yale Review