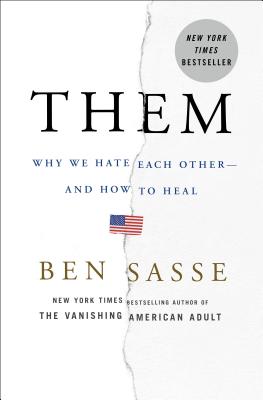 Why We Hate Each Other--and How to Heal

From the New York Times bestselling author of The Vanishing American Adult, an intimate and urgent assessment of the existential crisis facing our nation.

Something is wrong. We all know it.

American life expectancy is declining for a third straight year. Birth rates are dropping. Nearly half of us think the other political party isn’t just wrong; they’re evil. We’re the richest country in history, but we’ve never been more pessimistic.

In Them, bestselling author and U.S. senator Ben Sasse argues that, contrary to conventional wisdom, our crisis isn’t really about politics. It’s that we’re so lonely we can’t see straight—and it bubbles out as anger.

As traditional tribes of place evaporate, we rally against common enemies so we can feel part of a team. No institutions command widespread public trust, enabling foreign intelligence agencies to use technology to pick the scabs on our toxic divisions. We’re in danger of half of us believing different facts than the other half, and the digital revolution throws gas on the fire.

There’s a path forward—but reversing our decline requires something radical: a rediscovery of real places and human-to-human relationships. Even as technology nudges us to become rootless, Sasse shows how only a recovery of rootedness can heal our lonely souls.

America wants you to be happy, but more urgently, America needs you to love your neighbor and connect with your community. Fixing what's wrong with the country depends on it.


Praise For Them: Why We Hate Each Other--and How to Heal…

“Mr. Sasse’s experience as a senator in a time of hyperpartisanship gives his analysis a special poignancy… [his] remedies are wise and well-expressed… his prose has a distinctively cheerful warmth throughout. Perhaps at last we have a politician capable of writing a good book rather than having a dull one written for him.” —The Wall Street Journal

“Sasse is highly attuned to the cultural sources of our current discontents and dysfunctions. … Them is not so much a lament for a bygone era as an attempt to diagnose and repair what has led us to this moment of spittle-flecked rage. … a step toward healing a hurting nation.” —National Review

“Sasse is an excellent writer, unpretentious, thoughtful, and at times, quite funny … even if you disagree with some or all of what Sasse writes, it's an interesting book and his arguments are worth reading — as are his warnings about what our country might become.” —NPR

“If Sen. Ben Sasse is right – he has not recently been wrong about anything important – the nation’s most-discussed political problem is entangled with the least-understood public health problem. The political problem is furious partisanship. The public health problem is loneliness. Sasse’s new book argues that Americans are richer, more informed and “connected” than ever – and unhappier, more isolated and less fulfilled." —George Will, The Washington Post

“Sasse emphasizes the importance of civil debate, denouncing Fox News and MSNBC, and laments the extreme partisanship that characterizes public life in the Trump era. But ‘the dysfunction in D.C.,’ he says, stems from something ‘deeper than economics,’ and ‘deeper and more meaningful’ than politics. 'What’s wrong with America, then, starts with one uncomfortable word,' he writes. ‘Loneliness.’” —The New York Times

"An eloquent appeal for healing... what makes Them worth the read is Sasse's amalgam of realistic alarm and warning." —The Guardian

"Sasse presents a compelling, well-supported look at why so many of us no longer have strong community ties and, why, in spite of all the interconnectivity in our constantly expanding, internet-driven world, so many people feel lonely.... whether readers agree with his political views or not, Them is a crucial contribution to a more open and productive social dialogue." —Booklist

“A thoughtful plan of action to begin to dissolve the toxic divisions that threaten the very survival of our Republic. While I often find myself at odds with Senator Sasse over specific policies, we are as one when it comes to understanding the need to transcend these mostly superficial differences of party and partisanship to ensure that the country we both love endures. Here’s the blueprint for going forward—together." —Ken Burns, filmmaker

“Ben Sasse confronts our destructive obsession with political theater. Candid, sensible, and wise, Them gives a nation blinded by myside-ism a reminder that the love of neighbor is our highest calling, and the surest path back to our founding ideals.” —Arthur Brooks, president of the American Enterprise Institute

"Ben Sasse thinks free speech is in peril in the United States — and he's right. Far too many on both the left and the right are jettisoning America's inheritance and settling instead for the mentality of the mob. Sasse pulls no punches in diagnosing why we're experiencing so much loneliness, how technology is fueling greater division, and what we must do to put free expression and meaningful engagement back at the heart of our democracy. Read it!" —Kirsten Powers, USA Today

"Ben Sasse and I don't agree on every issue, but that's why this powerful and persuasive book is so important. Because we do agree on a fundamental point — Americans have to find a way to civilly discuss our differences and rebuild trust in each other or our nation is doomed. By examining the roots of this crisis, Them offers a path out of hate and toward greater understanding." —Eric Schmidt, executive chairman of Google (2001-2017)

“If you really want to know how to make America great again, get off of Twitter and read this book. Russian dictator Vladimir Putin knows that the moral, cultural, military, and economic power of the United States is far too great to challenge directly. And so, befitting his KGB background, he launches insidious attacks to turn Americans against each other. Unfortunately, as Them illustrates convincingly, this was already been happening on its own. The amazing American-made technology that is connecting the world is also dividing the country of its birth, weaponized by both foreign aggressors and home-grown demagogues to create bubbles of partisan hatred and collective ignorance. America may have lost its way, but Senator Sasse shows that the best way to recover is by bursting these tech bubbles and coming together as human beings, communities, and citizens. Them provides a map back to a place where Americans can once again savor the unique freedoms that unite them instead of the politics that divide them." —Garry Kasparov, world chess champion, and author of Winter Is Coming: Why Vladimir Putin and the Enemies of the Free World Must Be Stopped

“Senator Sasse’s Them is a cry from the heartland to remember who we are and what unites us. As a family man, scholar and politician, he takes contemporary America to task for our tribalism, exclusion, reflexive attitudes and outright harshness to one another. At its heart, his is a call to community—the best antidote to those who would divide our society and exploit our darkest angels.” —Gen. Michael Hayden (US Air Force, Ret.), former Director of the Central Intelligence Agency (CIA), and former Director of the National Security Agency (NSA)

“Finally, someone says it — politics will not solve our problems. And further, neither Trump nor the resistance is the cause of them. Malignant loneliness is. Through his inimitable historian’s gaze, Sasse cuts through the self-serving partisan noise to jerk us back into focus on what’s important: community. It’s so much easier to blame each other than to remember it’s “each other” that makes us great, fulfilled, healthy and moored. I don’t care how old you are, where you’re from or what you do — you need Ben Sasse to slap some sense into you. WE all need to hear the hard truths of Them.” —S.E. Cupp, CNN

“A wonderfully thoughtful — and wonderfully thought-provoking — book that challenges us to recognize and embrace, at a time of hyper-partisanship fueled by technology, the importance of what unites us as Americans over what divides us. Them provides a passionate and persuasive argument for rebuilding the bonds of community, planting roots and tending them, remembering what is truly important in life, and getting the most out of new technologies without allowing them to undermine our ability to come together to address the challenges we face.” —Gen. David Petraeus (US Army, Ret.), former commander of coalition forces in Iraq and Afghanistan, and former Director of the Central Intelligence Agency (CIA)

“In this era of division, we must remember America is at its best when we resolve conflicts through the principles of compassion, understanding, tolerance, and above all, civility in our political discourse. Our country was founded on the notion that these values could lead to a more just and more harmonious society. In Them, Ben Sasse reminds us that in order to preserve these basic tenets we must open our hearts to the hopes and anxieties of our fellow Americans, seek common ground and community where we can find it, and engage each other around shared values. Only then can we renew the dream of our Founders, to ‘create a more perfect union.’" —Sean Parker, founder of Napster, and first president of Facebook

U.S. Senator Ben Sasse is a fifth-generation Nebraskan. The son of a football and wrestling coach, he attended public school in Fremont, Nebraska, and spent his summers working soybean and corn fields. He was recruited to wrestle at Harvard before attending Oxford, and later earned a Ph.D. in American history from Yale. Prior to the Senate, Sasse spent five years as president of Midland University back in his hometown. As perhaps the only commuting family in the U.S. Senate, Ben and his wife, Melissa, live in Nebraska but are homeschooling their three children as they commute weekly back and forth to Washington, DC.
Loading...
or
Not Currently Available for Direct Purchase