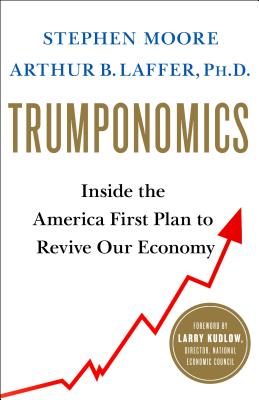 Inside the America First Plan to Revive Our Economy

Donald Trump promised the American people a transformative change in economic policy after eight years of stagnation under Obama. But he didn’t adopt a conventional left or right economic agenda. His is a new economic populism that combines some conventional Republican ideas–tax cuts, deregulation, more power to the states–with more traditional Democratic issues such as trade protectionism and infrastructure spending. It also mixes in important populist issues such as immigration reform, pressuring the Europeans to pay for more of their own defense, and keeping America first.

In Trumponomics, conservative economists Stephen Moore and Arthur B. Laffer offer a well-informed defense of the president's approach to trade, taxes, employment, infrastructure, and other economic policies. Moore and Laffer worked as senior economic advisors to Donald Trump in 2016. They traveled with him, frequently met with his political and economic teams, worked on his speeches, and represented him as surrogates. They are currently members of the Trump Advisory Council and still meet with him regularly. In Trumponomics, they offer an insider’s view on how Trump operates in public and behind closed doors, his priorities and passions, and his greatest attributes and liabilities.

Trump is betting his presidency that he can create an economic revival in America’s industrial heartland. Can he really bring jobs back to the rust belt? Can he cut taxes and bring the debt down? Above all, does he have the personal discipline, the vision, the right team, and the right strategy to pull off his ambitious economic goals? Moore and Laffer believe that he can pull it off and that Trumponomics will usher in a new era of prosperity for all Americans.


Praise For Trumponomics: Inside the America First Plan to Revive Our Economy…

"Stephen Moore and Arthur Laffer, two very talented men, have just completed an incredible book on my Economic Policies, or, as they call it, TRUMPONOMICS. They have really done a great job in capturing my long-held views and ideas. This book is on sale now—a terrific read of a really interesting subject!" —President Donald Trump

Stephen Moore is a former member of the Wall Street Journal's editorial board, and the Distinguished Visiting Fellow for The Heritage Foundation's Project for Economic Growth.

He is the co-author of Trumponomics.

ARTHUR B. LAFFER, the Father of Supply-Side Economics, was a member of Reagan's Economic Policy Advisory Board. Laffer and Stephen Moore are the economists behind the job creation platform that brought Trump to victory.
Loading...
or support indie stores by buying on
(This book is on backorder)