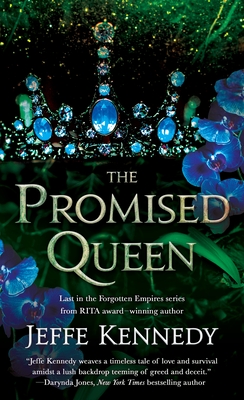 Perfect for fans of Sarah J. Maas, the lush romantic fantasy world of the Forgotten Empires series will sweep you away.

Conrí, former Crown Prince of Oriel, claimed the hand that wears the Abiding Ring, but the prophecy remains unfulfilled. Queen Euthalia of Calanthe returned to her island kingdom, but broken in mind and body. With the blood of war unleashing ancient terrors, Calanthe isn’t the haven it once was.

Praise for the Forgotten Empires:

"Kennedy’s world building is attentive and luxurious in this middle volume of a trilogy ... Readers looking for a well-balanced blend of romance and fantasy with a gradually building relationship and ever-increasing stakes should give the series a try." - Booklist on The Fiery Crown

"Kennedy's second in the 'Forgotten Empires' trilogy...does an excellent job of setting the stage for the conclusion. ...readers will be fascinated by the secrets revealed." - Library Journal on The Fiery Crown

"A thrilling tale of two strong-willed souls discovering what is truly important to them." - Romance Junkies on The Fiery Crown

"An enchanting world awaits in The Orchid Throne...With detailed world building and an intriguing cast of characters—especially a warrior woman and an enigmatic and amusing wizard—this captivating story will have readers holding their breath." - BookPage on The Orchid Throne

"An exciting start to a new series." - All About Romance on The Orchid Throne

"I highly recommend this for lovers of fantasy romance who like intricate but not overly complicated worldbuilding, strong characters, and exciting action packed scenes to go along with a sexy love story." - Harlequin Junkie (Top Pick) on The Orchid Throne

"An immediately absorbing and original novel by an author with a distinctive and thoroughly reader engaging narrative storytelling style, "The Orchid Throne" by Jeffe Kennedy will become an immediate and enduringly popular addition to community library Fantasy Fiction collections." - Midwest Book Review on The Orchid Throne

"A captivating read that grows more engrossing with each chapter." - Romance Reviews Today on The Orchid Throne

"This book is smart, sexy - smoldering, really - and so good!" - Read a Romance Month on The Orchid Throne