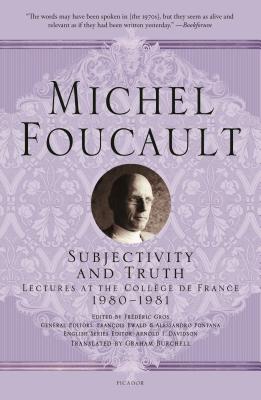 "Foucault must be reckoned with." —The New York Times Book Review

Praise for Foucault’s Lectures at the Collège de France Series
“Ideas spark off nearly every page...The words may have been spoken in [the 1970s] but they seem as alive and relevant as if they had been written yesterday.” —Bookforum

“[Foucault] has an alert and sensitive mind that can ignore the familiar surfaces of established intellectual codes and ask new questions...[He] gives dramatic quality to the movement of culture.” —The New York Review of Books

In 1981, Michel Foucault delivered a course of lectures that marked a decisive reorientation in his thought and of the project The History of Sexuality outlined in 1976. It was in these lectures that arts of living became the focal point around which he developed a new way of thinking about subjectivity. It was also the moment when Foucault problematized a conception of ethics understood as the patient elaboration of a relationship of self to self.

In these lectures, which clearly foreshadow The Use of Pleasure and The Care of the Self, Foucault examines the Greek subordination of gender differences to the primacy of an opposition between active and passive, as well as the development by Imperial stoicism of a model of the conjugal bond, which advocates unwavering fidelity and shared feelings and which leads to the disqualification of homosexuality. Once more, his lectures demonstrate that Foucault “is quite central to our sense of where we are” (The Nation).