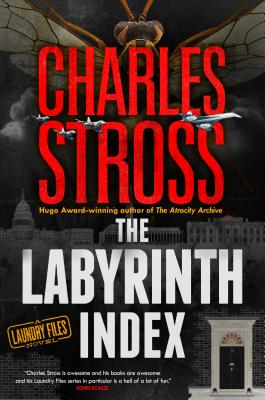 “A bizarre yet effective yoking of the spy and horror genres.” —The Washington Post Book World

The Lovecraftian Singularity has descended upon the world in The Labyrinth Index, beginning an exciting new story arc in Charles Stross' Hugo Award-winning Laundry Files series!

Since she was promoted to the head of the Lords Select Committee on Sanguinary Affairs, every workday for Mhari Murphy has been a nightmare. It doesn’t help that her boss, the new Prime Minister of Britain, is a manipulative and deceptive pain in the butt. But what else can she expect when working under the thumb of none other than the elder god N’yar Lat-Hotep a.k.a the Creeping Chaos?

Mhari's most recent assignment takes her and a ragtag team of former Laundry agents across the pond into the depths of North America. The United States president has gone missing. Not that Americans are alarmed. For some mysterious reason, most of the country has forgotten the executive branch even exists. Perhaps it has to do with the Nazgûl currently occupying the government and attempting to summon Cthulhu.

It's now up to Mhari and her team to race against the Nazgûl's vampire-manned dragnet to find and, for his own protection, kidnap the president.

Who knew an egomaniacal, malevolent deity would have a soft spot for international relations?

CHARLES STROSS (he/him) is a full-time science fiction writer and resident of Edinburgh, Scotland. He has won three Hugo Awards for Best Novella, including for the Laundry Files tale “Equoid.” His work has been translated into over twelve languages. His novels include the bestselling Merchant Princes series, the Laundry series (including Locus Award finalist The Dilirium Brief), and several stand-alones including Glasshouse, Accelerando, and Saturn's Children.