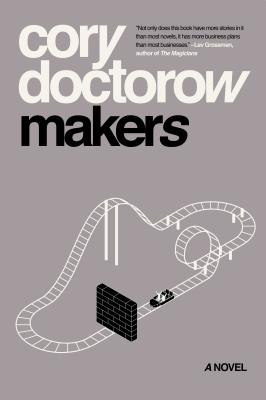 “Based on Cory Doctorow's predictive abilities, Makers seems like an all-too-true forecast of the near future. The result is both frightening and exhilarating and filled with characters you wish you knew. (Who knows, maybe you do!)”
— Randy Smith, Destinations Booksellers, New Albany, IN
View the List

From Cory Doctorow, the New York Times bestselling author of Little Brother, the repackaged trade paperback of Makers, a novel of the booms, busts, and further booms in store for America—now with a new cover!

Perry and Lester invent things—seashell robots that make toast, Boogie Woogie Elmo dolls that drive cars. They also invent entirely new economic systems, like the "New Work," a New Deal for the technological era. Barefoot bankers cross the nation, microinvesting in high-tech communal mini-startups like Perry and Lester's. Together, they transform the country, and Andrea Fleeks, a journo-turned-blogger, is there to document it.

Then it slides into collapse. The New Work bust puts the dot.combomb to shame. Perry and Lester build a network of interactive rides in abandoned Wal-Marts across the land. As their rides, which commemorate the New Work's glory days, gain in popularity, a rogue Disney executive grows jealous, and convinces the police that Perry and Lester's 3D printers are being used to run off AK-47s.

Hordes of goths descend on the shantytown built by the New Workers, joining the cult. Lawsuits multiply as venture capitalists take on a new investment strategy: backing litigation against companies like Disney. Lester and Perry's friendship falls to pieces when Lester gets the ‘fatkins' treatment, turning him into a sybaritic gigolo.

Then things get really interesting.


Praise For Makers: A Novel…

“I know many science fiction writers engaged in the cyber-world, but Cory Doctorow is a native. We should all hope and trust that our culture has the guts and moxie to follow this guy. He's got a lot to tell us.” —Bruce Sterling

“A rousing tale of techno-geek rebellion--as necessary and dangerous as file sharing, free speech, and bottled water on a plane.” —Scott Westerfeld on Little Brother

“A terrific read.... It claims a place in the tradition of polemical science-fiction novels like 1984 and Fahrenheit 451 (with a dash of Mr. Smith Goes to Washington).” —The New York Times Book Review on Little Brother

“Enthralling.... One of the year's most important books.” —Chicago Tribune on Little Brother