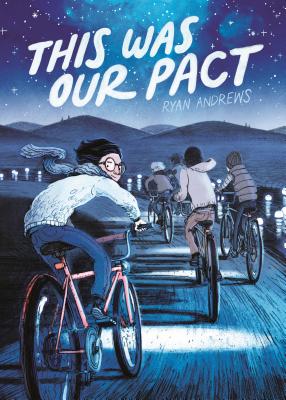 This Was Our Pact

“The pact is simple: keep going down the river to see where the lanterns go. No one turns for home and no one looks back. This is a refreshing adventure story featuring two boys who follow lanterns along the river, lit by their town on the autumn equinox, to see where they end up. The myth says they turn into stars, but Ben and Nathaniel are the only two who make the journey to actually find out. The illustrations and color palate helped tell the story, which was in parts sweet, funny, magical, and touching. Also, there’s a dashing talking bear. This is a great story for readers of all ages!”
— Katrina Bright-Yerges, Books & Company, Oconomowoc, WI
View the List

Ryan Andrews's This Was Our Pact is an astonishing, magical-realist adventure story for middle-grade readers.

It's the night of the annual Autumn Equinox Festival, when the town gathers to float paper lanterns down the river. Legend has it that after drifting out of sight, they'll soar off to the Milky Way and turn into brilliant stars, but could that actually be true? This year, Ben and his classmates are determined to find out where those lanterns really go, and to ensure success in their mission, they've made a pact with two simple rules: No one turns for home. No one looks back.

The plan is to follow the river on their bikes for as long as it takes to learn the truth, but it isn't long before the pact is broken by all except for Ben and (much to Ben's disappointment) Nathaniel, the one kid who just doesn't seem to fit in.

Together, Nathaniel and Ben will travel farther than anyone has ever gone, down a winding road full of magic, wonder, and unexpected friendship*.

*And a talking bear.


Praise For This Was Our Pact…

"An original and much-needed view of the complex world of middle-school friendships." —New York Times

"Andrews' marvelously melancholic, earnest graphic novel, [is] at its core an exercise in whimsical self-reflection. This story's a quiet one in which danger flickers and hope flares at odd but fruitful moments...the primarily blue and red mixed-media pictures underscore how nighttime sometimes promises transformation. Brilliantly enchanting." —Kirkus, starred review


"Andrews crafts a phantasmagoria of events that recall animation from Studio Ghibli and Cartoon Saloon...picaresque episodes and a dreamlike resolution conjure a giddy sensation, like staying up all night. " —Publishers Weekly, starred review

"Richly imagined and complexly emotional... [This was Our Pact] may owe some of its eerie melancholy and occasionally menacing absurdity to the likes of Lewis Carroll and Shaun Tan, but its message is distinctly its own: what you imagine to be the end of the journey may be satisfying, but the adventure actually goes on as long as you keep riding down the road." —Booklist, starred review

"For readers who want an escapist fantasy with a light touch. Hand this title to fans of whimsical or unpredictable adventures such as Neil Gaiman’s Fortunately, the Milk or Madeleine L’Engle’s A Wrinkle in Time." —School Library Journal, starred review

"An enthralling tale of friendship, determination, and wonder." —Horn Book

"A great starting point for fantasy lovers who haven’t yet embraced graphic novels." —The Bulletin of the Center for Children's Books

Ryan Andrews lives in the Japanese countryside, with his wife, two kids, and their dog. A friendly Kodama or two have been known to take up residence in the giant acorn tree that shades the house. Ryan works at his drawing desk in the early morning hours, to the sound of rummaging wild boar and badgers, who come from the surrounding forest seeking out shiitake mushrooms and fallen chestnuts. This Was Our Pact is his first book with First Second.
Loading...
or support indie stores by buying on