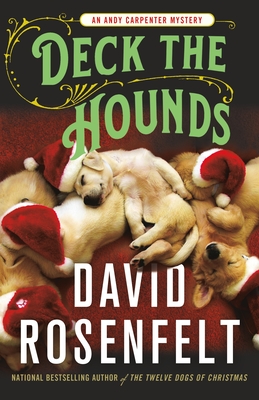 Reluctant lawyer Andy Carpenter doesn’t usually stop to help others, but seeing a dog next to a homeless man inspires him to give the pair some money to help. It’s just Andy’s luck that things don’t end there. Soon after Andy’s encounter with them, man and dog are attacked in the middle of the night on the street. The dog defends its new owner, and the erstwhile attacker is bitten but escapes. But the dog is quarantined and the man, Don Carrigan, is heartbroken.

Andy’s wife Laurie can’t resist helping the duo after learning Andy has met them before… it’s the Christmas season after all. In a matter of days Don and his dog Zoey are living above Andy’s garage and become two new additions to the family. It’s not until Andy accidentally gives away his guest’s name during an interview that things go awry; turns out Don is wanted for a murder that happened two years ago. Don not only claims he’s innocent, but that he had no idea that he was wanted for a crime he has no knowledge of in the first place. It’s up to Andy to exonerate his new friend, if he doesn’t get pulled into the quagmire first.

David Rosenfelt’s signature wit, charm, and cleverness are back again in this most exciting installment yet.

Praise for Deck the Hounds

“Never less than absorbing, with a chuckle on every page . . . Andy’s self-deprecating humor is the author’s great gift.” —David Rothenberg, WBAI Radio

“A favorite private investigator/lawyer series of long standing. This one’s as witty as they usually are, and as always a real mystery.” —Southern County Democrat

“As is always the case with Rosenfelt's Carpenter novels, nearly every page will elicit a smile, if not out-loud laughter.” —NJ.com

“Perfect for reading during the holiday season . . . [Deck the Hounds] is filled with Rosenfelt’s signature self-deprecating humor and witty repartee.” —Pamela Kramer

DAVID ROSENFELT is the Edgar-nominated and Shamus Award-winning author of more than twenty Andy Carpenter novels, including One Dog Night, Collared, and Deck the Hounds; its spinoff series, The K-Team; the Doug Brock thriller series, which starts with Fade to Black; and stand-alone thrillers including Heart of a Killer and On Borrowed Time. Rosenfelt and his wife live in Maine with an ever-changing pack of rescue dogs. Their epic cross-country move with 25 of these dogs, culminating in the creation of the Tara Foundation, is chronicled in Dogtripping.
Loading...
or
Not Currently Available for Direct Purchase