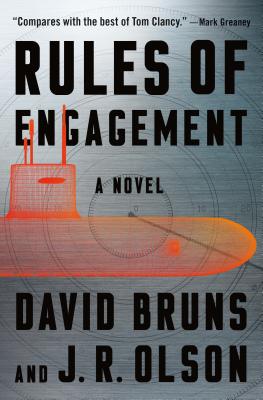 
Praise For Rules of Engagement: A Novel (The WMD Files #3)…

"A fast and furious tale of cyberwarfare... Bruns and Olson kick off their new series with a thundering bang." —The Real Book Spy

"Fans of the cyberwarfare genre will enjoy this novel's snappy pace, broad cast of characters, and timeliness." —Kirkus Reviews

"With their background in the U.S. Navy, both Bruns and Olson have the right stuff to create a realistic military tale." —Booklist

"In this terrifying age of hacking that threatens not only our elections, but every infrastructure from our power grid to our economic system, the ultimate threat would be a cyber war that touched off a shooting war. Rules of Engagement lays out that highly plausible scenario in one of those fantastic novels that is hard to put down. Hell of a fine read!" —David Hagberg, New York Times bestselling author

"Rules of Engagement is a classic thriller that has it all - compelling, realistic action, vivid characters and a relentless pace. You won't be able to put it down!" —Rick Campbell, author of Trident Deception and Treason


With J. R. Olson, Bruns is the author of the WMD (Weapons of Mass Deception) Files series.


With David Bruns, Olson is the author of the WMD (Weapons of Mass Deception) Files series.