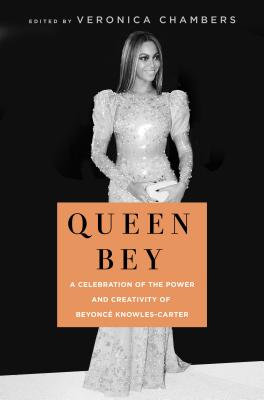 A Celebration of the Power and Creativity of Beyoncé Knowles-Carter

"Beyoncé fans will eat it up." —People

"You don't need to be in the Beyhive to appreciate Queen Bey...Voices including culture critic Luvvie Ajayi and actress and producer Lena Waithe give us a fresh take on Beyoncé, who's arguably the biggest pop star of our time." —Essence

Beyoncé. Her name conjures more than music, it has come to be synonymous with beauty, glamour, power, creativity, love, and romance. Her performances are legendary, her album releases events. She is not even forty but she has already rewritten the Beyoncé playbook more than half a dozen times. She is consistently provocative, political and surprising. As a solo artist, she has sold more than 100 million records. She has won 22 Grammys and is the most-nominated woman artist in the history of Grammy awards. Her 2018 performance at Coachella wowed the world. The New York Times wrote: "There's not likely to be a more meaningful, absorbing, forceful and radical performance by an American musician this year or any year soon." Artist, business woman, mother, daughter, sister, wife, black feminist, Queen Bey is endlessly fascinating.

Queen Bey features a diverse range of voices, from star academics to outspoken cultural critics to Hollywood and music stars. Essays include:

"What Might a Black Girl Be in This World," an introduction by Veronica Chambers
"Beychella is Proof That Beyoncé is the Greatest Performer Alive. I’m Not Arguing." by Luvvie Ajayi
"On the Journey Together," by Lena Waithe
"What Beyoncé Means to Everyone," by Meredith Broussard with visualizations by Andrew Harvard and Juan Carlos Mora
"Jay-Z's Apology to Beyoncé Isn't Just Celebrity Gossip — It's a Political Act" by Brittney Cooper
"All Her Single Ladies" by Kid Fury
"The Elevator" by Ylonda Gault
"The Art of Being Beyoncé" by Maria Brito
"Getting, Giving and Leaving" by Melissa Harris Perry and Mankaprr Conteh
"Beyoncé the Brave" by Reshma Saujani
"Living into the Lemonade: Redefining Black Women’s Spirituality in the Age of Beyoncé" by Candice Benbow
"Beyoncé’s Radical Ways" by Carmen Perez
"Finding la Reina in Queen Bey" by Isabel Gonzalez Whitaker
"Beyoncé, Influencer" by Elodie Maillet Storm
"The King of Pop and the Queen of Everything" by Michael Eric Dyson
"Style So Sacred" by Edward Enninful
"The Beauty of Beyoncé" by Fatima Robinson
"Because Beyoncé." by Ebro Darden
"King Bey" by Treva B. Lindsey
"Meridonial: Beyoncé’s Southern Roots and References" by Robin M. Boylorn
"B & V: A Love Letter" by Caroline Clarke


Praise For Queen Bey: A Celebration of the Power and Creativity of Beyoncé Knowles-Carter…

"This collection of critical appreciations, compiled by a Times editor, assesses its superstar subject on the basis of her music, fashion, feminism, business skills, and more." —The New York Times Book Review

"As if you needed another reason to love Beyoncé, this anthology of essays in appreciation of the superstar will give you at least 20 more. Chambers...weaves together voices of the famous, brilliant and thoughtful." —AMNewYork

"Reading this book feels...a lot like attending a sorority gathering when the sisters shout out their love, admiration, and respect for a polished performer who epitomizes the best of contemporary African American female culture and values." —New York Journal of Books

"Actors, academics and critics unpack the impact of a megastar in a collection of essays edited by Chambers. The group meditation on one of the world's greatest living icons features pieces by writer-producer Lena Waithe, comedian Kid Fury and scholar Brittney Cooper and examines Beyonce as a paragon of black female power, the model she sets for what a modern performer should be and more." —Time

"If Beyoncé is your queen (as she should be), your bookshelf needs this collection of essays dedicated to the legendary lady." —HelloGiggles

"With such a dynamic ensemble of opinions and reflections, the collection will be sweet reading not just for Beyoncé's superfans, but also for activists, feminists, and budding vocalists. An uplifting and resounding ovation." —Kirkus Reviews

VERONICA CHAMBERS is the editor of the New York Times archival storytelling team, a new initiative devoted to publishing articles based on photographs recently rediscovered as the paper digitizes millions of images. She is the editor of The Meaning of Michelle, celebrating the former first lady, which was a Los Angeles Times bestseller and a Time Magazine Top Nonfiction of the year. Veronica has written several books as well, including Mama’s Girl, a critically acclaimed memoir, and she co-wrote Yes, Chef with Marcus Samuelsson and 32 Yolks with Eric Ripert.
Loading...
or
Not Currently Available for Direct Purchase