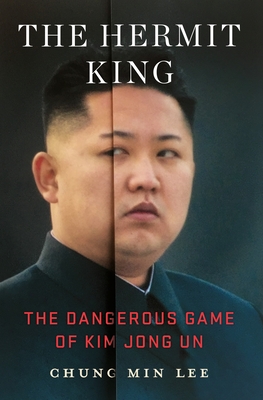 North Korea is poised at the crossroads of history. Which direction will its leader take?

Throughout the world, oppressive regimes are being uprooted and replaced by budding democracies, but one exception remains: The People's Republic of North Korea. The Kim family has clung to power for three generations by silencing dissidents, ruling with an iron fist, and holding its neighbors hostage with threats of war. Under the leadership of Kim Jong Un, North Korea has come closer than ever to creating a viable nuclear arsenal, but widespread famine and growing resistance are weakening his regime's stability.

In The Hermit King, Asian geopolitical expert Chung Min Lee tells the story of the rise of the Kim Dynasty and its atrocities, motivations, and diplomatic goals. He also discusses the possible outcomes of its aggressive standoff with the world superpowers.

Kim Jong Un is not a crazed "Rocket Man" or a bumbling despot; he has been groomed since birth to take control of his country and stay in power at all costs. He is now at a fateful crossroads. Will he make good on decades of threats, liberalize North Korea and gain international legitimacy, or watch his regime crumble around him? Lee analyzes the likelihood and consequences of each of these possibilities, cautioning that in the end, a humanitarian crisis in the region is all but unavoidable. The Hermit King is a thoughtful and compelling look at the most complicated diplomatic situation on Earth.

Chung Min Lee is a senior fellow at the Carnegie Endowment for International Peace and chairman of the international advisory council of the International Institute for Strategic Studies. He is an expert on Korean and East Asian security affairs with more than 30 years of experience in leading think tanks and universities in South Korea, the U.S., Japan, and Singapore. Lee served as Ambassador for National Security Affairs (2013-2016) and is the author of Fault Lines in a Rising Asia.

Praise For The Hermit King: The Dangerous Game of Kim Jong Un…

“Critical reading for anyone interested in the future of the Korean Peninsula…Refreshing, honest and steeped in the analytic judgements of a long-time watcher of the hermit kingdom.” —Evan Medeiros, Penner Family Chair in Asian Studies, Georgetown University

“Full of insights too often missed in the recent focus on North Korea's nuclear threat and Trump-Kim summitry. Lee not only highlights the history, culture and context that has shaped Kim Jong Un, but explains why Kim faces an enormous ‘Catch-22’ in pursuing economic transformation of his country while maintaining his grip on power. A stimulating and highly readable contribution.” —Kathleen Stephens, former US Ambassador to South Korea

“A breakout book from an author with more than thirty years of experience as one of Asia’s top security experts. No one in South Korea can tell the North Korean story to an American audience more compellingly than Chung Min Lee.” —Hyun In-taek, Professor of International Relations, Korea University and former Minister of Unification

“A comprehensive and up-to-date picture of North Korea under Kim Jong Un. If one wants to make sense of recent news concerning North Korea, this book is a must-read.” —Andrei Lankov, Professor of North Korean Studies, Kukmin University and author of The Real North Korea

“Kim Jong Un desperately wants to become North Korea’s Deng Xiaoping, but that would require him to loosen his family’s grip on power. Lee explores this dilemma and details the ongoing abuses of the failing North Korean system. Read this book if you want to understand North Korea and its formidable leader.” —Michael Fullilove, Director of the Lowy Institute