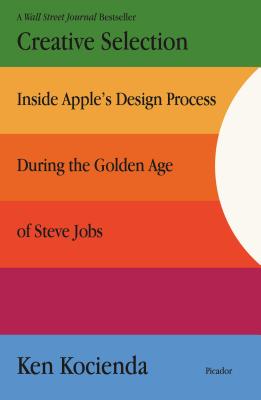 Inside Apple's Design Process During the Golden Age of Steve Jobs

An insider's account of Apple's creative process during the golden years of Steve Jobs.

Hundreds of millions of people use Apple products every day; several thousand work on Apple's campus in Cupertino, California; but only a handful sit at the drawing board. Creative Selection recounts the life of one of the few who worked behind the scenes, a highly-respected software engineer who worked in the final years of the Steve Jobs era—the Golden Age of Apple.

Ken Kocienda offers an inside look at Apple’s creative process. For fifteen years, he was on the ground floor of the company as a specialist, directly responsible for experimenting with novel user interface concepts and writing powerful, easy-to-use software for products including the iPhone, the iPad, and the Safari web browser. His stories explain the symbiotic relationship between software and product development for those who have never dreamed of programming a computer, and reveal what it was like to work on the cutting edge of technology at one of the world's most admired companies.

Kocienda shares moments of struggle and success, crisis and collaboration, illuminating each with lessons learned over his Apple career. He introduces the essential elements of innovation—inspiration, collaboration, craft, diligence, decisiveness, taste, and empathy—and uses these as a lens through which to understand productive work culture.

An insider's tale of creativity and innovation at Apple, Creative Selection shows readers how a small group of people developed an evolutionary design model, and how they used this methodology to make groundbreaking and intuitive software which countless millions use every day.


Praise For Creative Selection: Inside Apple's Design Process During the Golden Age of Steve Jobs…

"I’d be interested in the behind-the-scenes story of any Apple product. But if there is one I’m most interested in, it’s the iPhone. Kocienda delivers just that, and it truly is extraordinary. This book is a must-read for anyone interested in how Apple actually creates its products." —John Gruber, Daring Fireball

“Kocienda reveals the real secret of Steve Jobs's leadership and Apple's magic: the ability to push people to think for themselves, and to empower them to turn their best thinking into reality. It is a story about the intersection of technology and humanity.” —Kim Scott, New York Times bestselling author of Radical Candor

“I’ve literally been waiting a decade for this book. Ken Kocienda takes you inside Apple in way only a true insider, a veteran software developer, could. Creative Selection is the answer to the prayer uttered by anyone who wants to truly understand how Apple works. I couldn’t put it down.” —Adam Lashinsky, New York Times bestselling author of Inside Apple

“Ken Kocienda played pivotal roles in the creation of both Safari and the original iPhone. One of the hardest problems—and biggest risks—of the first iPhone was the development of a multi-touch keyboard. I placed this formidable responsibility squarely in Ken’s hands, and the success of the keyboard emerged from his insights, collaboration, and dogged pursuit of excellence. He now offers readers, in his own words, a window into his experiences and insights from the trenches.” —Scott Forstall, Original iPhone Software Team Leader and SVP iOS, Apple

“If you’ve ever wondered what it’s like to work in a hotbed of innovation, you’ll enjoy this inside view of life at Apple. Ken Kocienda pioneered the iPhone keyboard, and this book gives a play-by-play of their creative process—from generating ideas to doing a demo for Steve Jobs.” —Adam Grant, New York Times bestselling author of Originals, Give and Take, and Option B (with Sheryl Sandberg)

Ken Kocienda was a principal engineer of iPhone software at Apple for over fifteen years. After graduating from Yale, he fixed motorcycles, worked in the editorial library of a newspaper, taught English in Japan, and made fine art photographs. Eventually, he discovered the internet, taught himself computer programming, and made his way through a succession of dot-com-era startups, before landing at Apple in 2001, where he worked on the software teams that created the Safari web browser, iPhone, iPad, and Apple Watch. Ken lives in San Jose, California with his wife. Creative Selection is his first book.
Loading...
or support indie stores by buying on