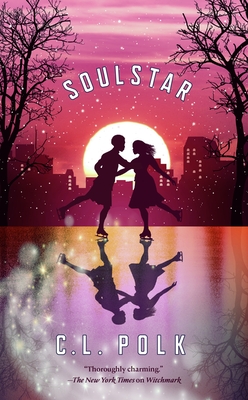 Shortlisted for the Aurora Award for Best Novel

With Soulstar, C. L. Polk concludes her riveting Kingston Cycle, a whirlwind of magic, politics, romance, and intrigue that began with the World Fantasy Award-winning Witchmark. Assassinations, deadly storms, and long-lost love haunt the pages of this thrilling final volume.

For years, Robin Thorpe has kept her head down, staying among her people in the Riverside neighborhood and hiding the magic that would have her imprisoned by the state. But when Grace Hensley comes knocking on Clan Thorpe’s door, Robin’s days of hiding are at an end. As freed witches flood the streets of Kingston, scrambling to reintegrate with a kingdom that destroyed their lives, Robin begins to plot a course that will ensure a freer, juster Aeland. At the same time, she has to face her long-bottled feelings for the childhood love that vanished into an asylum twenty years ago.

Can Robin find happiness among the rising tides of revolution? Can Kingston survive the blizzards that threaten, the desperate monarchy, and the birth throes of democracy? Find out as the Kingston Cycle comes to an end.


Praise For Soulstar (The Kingston Cycle #3)…

C. L. Polk is the author of the World Fantasy Award winning novel Witchmark, the first novel of the Kingston Cycle. After leaving high school early, they have worked as a film extra, sold vegetables on the street, and identified exotic insect species for a vast collection of lepidoptera before settling down to write silver fork fantasy novels. Polk lives near the Bow River in Calgary, Alberta, in a tiny apartment with too many books and a yarn stash that could last a decade. They ride a green bicycle with a basket on the front. They spend too much time on Twitter.
Loading...
or support indie stores by buying on