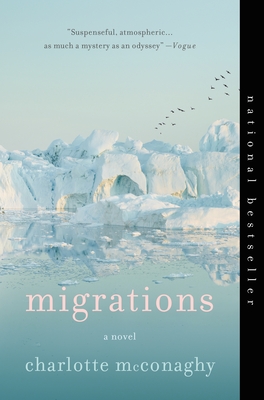 Franny Stone has always been the kind of woman who is able to love but unable to stay. Leaving behind everything but her research gear, she arrives in Greenland with a singular purpose: to follow the last Arctic terns in the world on what might be their final migration to Antarctica. Franny talks her way onto a fishing boat, and she and the crew set sail, traveling ever further from shore and safety. But as Franny’s history begins to unspool—a passionate love affair, an absent family, a devastating crime—it becomes clear that she is chasing more than just the birds. When Franny's dark secrets catch up with her, how much is she willing to risk for one more chance at redemption?

Epic and intimate, heartbreaking and galvanizing, Charlotte McConaghy's Migrations is an ode to a disappearing world and a breathtaking page-turner about the possibility of hope against all odds.


Praise For Migrations: A Novel…

“Visceral and haunting…As well as a first-rate work of climate fiction, Migrations is also a clever reimagining of Moby-Dick…This novel’s prose soars with its transporting descriptions of the planet’s landscapes and their dwindling inhabitants, and contains many wonderful meditations on our responsibilities to our earthly housemates…Migrations is a nervy and well-crafted novel, one that lingers long after its voyage is over.”
—The New York Times Book Review

"The beauty and the heartbreak of this novel is that it’s not preposterous. It feels true and affecting, elegiac and imminent...The fractured timeline fills each chapter with suspense and surprises, parceled out so tantalizingly that it took disciplined willpower to keep from skipping down each page to see what happens...In many ways, this is a story about grieving, an intimate tale of anguish set against the incalculable bereavements of climate change...Ultimately hopeful."
—The Washington Post

“An aching and poignant book, and one that’s pressing in its timeliness. It’s often devastating in its depictions of grief, especially the wider, harder to grasp grief of living in a world that has changed catastrophically…But it’s also a book about love, about trying to understand and accept the creatureliness that exists within our selves, and what it means to be a human animal, that we might better accommodate our own wildness within the world.”
—The Guardian

“Powerful…Vibrant…Unique…If worry is the staple emotion that most climate fiction evokes in its readers, Migrations—the novelistic equivalent of an energizing cold plunge—flutters off into more expansive territory…McConaghy has a gift for sketching out enveloping, memorable characters using only the smallest of strokes… Migrations, rather than struggle to convince readers of some plan of environmental action, instead puts humans in their place.”
—Los Angeles Times

“Thrilling…In piecing together who this mysterious protagonist really is, McConaghy creates a detailed portrait of a woman on the cusp of collapse, consumed with a world that is every bit as broken as she is. Migrations offers a grim window into a future that doesn’t feel very removed from our own, which makes Franny’s voice all the more powerful. In understanding how nature can heal us, McConaghy underlines why it urgently needs to be protected.”
—TIME

“Gripping…By merging cli-fi and nature writing, the novel powerfully demonstrates the spiritual and emotional costs of environmental destruction.”
—The Economist

“A good nautical adventure…Migrations moves at a fast, exciting clip, motored as much by love for ‘creatures that aren’t human’ as by outrage at their destruction.”
—The Wall Street Journal

“You can practically hear the glaciers cracking to pieces and the shrill yelps of the circling terns.”
—Vulture

“Suspenseful, atmospheric…As much a mystery as an odyssey.”
—Vogue

"Gorgeous…A personal reckoning that cuts right to theheart. This beautiful novel is an ode—if not an elegy—to an endangered planetand the people and places we love.”
—Literary Hub

"At a time when it feels like we’re at the end of the world, this novel about a different kind of end of the world serves as both catharsis and escape."
—Harper's Bazaar

"An ode to our disappearing natural world."
—Newsweek

“Migrations is a gripping tale that ultimately celebrates the beauty and resilience of the creatures—human and animal—that endure.”
—Sierra Magazine

“An exceptional novel that is both elegy and page-turning thriller.”
—Maclean’s Magazine

“[Migrations] could be taking place in two years or 20 years, but it could just as well be happening today…A consummate blend of issue and portrait, warning and affirmation, this heartbreaking, lushly written work is highly recommended.”
—Library Journal (starred review)

“Transfixing, gorgeously precise…[The] evocation of a world bereft of wildlife is piercing; Franny’s otherworldliness is captivating, and her extreme misadventures and anguished secrets are gripping.”
—Booklist (starred review)

"Migrations is as beautiful and as wrenching as anything I've ever read. This is an extraordinary novel by a wildly talented writer."
—Emily St. John Mandel, author of The Glass Hotel and Station Eleven

"This novel is enchanting, but not in some safe, fairy-tale sense. Charlotte McConaghy has harnessed the rough magic that sears our souls. I recommend Migrations with my whole heart."
—Geraldine Brooks, author of The Secret Chord and March

"Migrations is a wonder. I read it in a gasp. There is hope in these pages; a balm for these troubled times. Charlotte McConaghy's words cut through to the bone."
—Lara Prescott, author of The Secrets We Kept

“An elegiac meditation on human and nonhuman loss...Immersive and haunting and quietly arresting.”
—Jeff VanderMeer, author of Annihilation

“An astounding meditation on love, trauma, and the cost of survival. A true force of a book that I read holding my breath from its start to its symphonic finish.”
—Julia Fine, author of What Should Be Wild

“Migrations is indeed about loss—but what makes it miraculous is that it is also about hope. Written in prose as gorgeous as the crystalline beauty of the Arctic, Migrations is deeply moving, haunting, and, yes, important.”
—Caroline Leavitt, author of Pictures of You and Cruel Beautiful World

“At times devastating and, at others, surprisingly, undeniably hopeful…Brimming with stunning imagery and raw emotion, Migrations is the incredible story of personal redemption, self-forgiveness and hope for the future in the face of a world on the brink of collapse.”
—Shelf Awareness

Charlotte McConaghy is the New York Times bestselling author of Once There Were Wolves and Migrations, which are being translated into more than twenty languages. She is based in Sydney, Australia.

1. The novel’s epigraph is taken from a poem by Rumi: “Forget safety. / Live where you fear to live.”How does that directive resonate throughout Franny’s life? Do you think it’s good advice?

2. Discuss the novel’s first lines: “The animals are dying. Soon we will be alone here.” How does the disappearance of wildlife in mass extinctions shape the characters and plot? What are the similarities and differences between Franny’s world and our own? Would you describe this novel as dystopian? Why or why not?

3. Arctic terns have the longest natural migration of any animal, and during their lives they may travel the equivalent distance of to the moon and back three times. What do Arctic terns symbolize in the novel, and why are Franny and Niall so drawn to them in particular?

5. What does Ireland represent for Franny? Australia? Discuss the importance of home and belonging in this novel, and how Franny’s search for it shapes her life.

6. Franny says: “It isn’t fair to be the kind of creature who is able to love but unable to stay.” Why does she have so much trouble staying, even with the people she most loves? Did you find that aspect of her character sympathetic? Right before their car accident, Niall tells Franny, “There’s a difference between wandering and leaving. In truth, you’ve never once left me.” Do you agree?

7. Anik tells Franny: “The stronger you are, the more dangerous the world.” What does he mean? Discuss this statement with regard to Franny and Ennis in particular.

8. Franny’s conscience is split between protesting destructive fishing practices and depending on a fishing vessel to follow the terns. She and Niall devote much of their lives together to conservation, although their lifestyle sometimes runs counter to that effort (for instance, they still drive, fly, smoke, etc.). Did you sympathize with these contradictions?

9. At the Mass Extinction Reserve (MER) base, the conservationists prioritize saving animals that help humanity, such as pollinators, rather than, in Franny’s words, “the animals that exist purely to exist, because millions of years of evolution have carved them into miraculous being.” Is that prioritization selfish or justifiably practical? What do we lose in allowing the wild to disappear?

10. Niall and the other scientists at MER argue over the best way to protect birds. Niall believes that migration is inherent to their nature, while Harriet counters that they should learn to survive without migration, as a necessary adaptation. Whose argument do you find more convincing?

11. In one of his lectures, Niall says of wildlife: “They are being violently and indiscriminately slaughtered by our indifference. It has been decided by our leaders that economic growth is more important.” How does that resonate in our world, as leaders debate the appropriate response to climate change? What is our responsibility to the planet?

12. Franny loves the sea“ with every breath of me, every beat of me.” What does the sea represent for her? Why is she so drawn to it?

13. Franny describes her life up until she decides to follow the terns as “a migration without a destination.” Why do you think she spends so much of her life without ambition or direction? What are the positives and negatives of that sort of existence?

14. When Ennis tells Franny about his wife, Saoirse, asking him to leave so he won’t see her Huntington’s disease progress, Franny is adamant: “You have to go back to your family. You don’t understand how important it is.” Do you think Ennis was right to do what his wife asked? Is his inability to stay similar to Franny’s?

15. Ennis tells Franny about Point Nemo, “the remotes tplace in the world, farther from land than anywhere else.” When she asks what it’s like, he replies, “There’s nowhere crueler or lonelier.. . . It’s quiet.” Why are Ennis and Franny so drawn to Point Nemo? How does it resonate with the rest of the novel?

17. Why does Franny take responsibility for the deaths of Niall and Greta? Do you think she is right to blame herself and plead guilty?

18. At a few key moments in the novel, including on the last page, Franny remembers her mother’s advice: “Look for the clues to life, they’re hidden everywhere.” What does she mean? Discuss the role of fate vs. freewill in these characters’ lives.

19. What does Franny hope to accomplish by following the terns on their last migration? What about Ennis? What do you think the future holds for them?