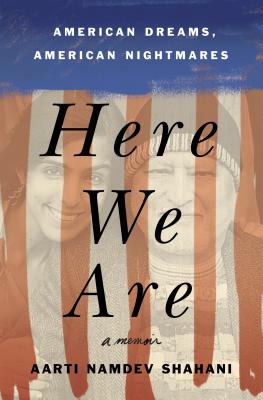 
Praise For Here We Are: American Dreams, American Nightmares (A Memoir)…

Aarti Namdev Shahani is the author of memoir Here We Are: American Dreams, American Nightmares. She is a correspondent for NPR based in Silicon Valley, covering the largest companies on earth. Her reporting has received awards from the Society of Professional Journalists, a regional Edward R. Murrow Award, and an Investigative Reporters & Editors Award. Before journalism, Shahani was a community organizer in New York City, helping prisoners and families facing deportation. Her activism was honored by the Union Square Awards and Legal Aid Society. She received a Master's in Public Policy from the Harvard Kennedy School of Government, with generous support from the university and the Paul and Daisy Soros Fellowship for New Americans. She completed her bachelor's degree in anthropology at the University of Chicago. She was among the youngest recipients of the Charles H. Revson Fellowship at Columbia University and is an alumna of A Better Chance, Inc. Shahani grew up in Flushing, Queens—in one of the most diverse zip codes in the country—and believes every American should visit her hometown to understand what makes America great.

1. Why did Aarti’s parents decide to come to America even though they didn’t have papers? Do you think they made the right decision?

2. How do you think A Better Chance Inc. and Brearley changed Aarti’s perspectives and the course of her life?

3. What were the effects of the September 11, 2001 attacks on Aarti’s advocacy efforts in New York and Washington, DC?

4. Aarti describes the gentrification of the area on Broadway where her father and uncle had their store. Have you seen anything similar happening in areas near you?

5. How do you feel about Judge Blumenfeld’s criticism to Aarti: “You’re not living a life about what you were really born to do”?

6. How did Aarti’s relationship with her father evolve over the course of their story? In what ways did the tragedy he experienced actually increase their understanding of one another?

7. Why do you think Aarti became a journalist? How does her work as a journalist inform the way she shared her family’s story?

8. Aarti comes to question if the U.S. is her home, and her father’s home. What would you say makes your country your home?