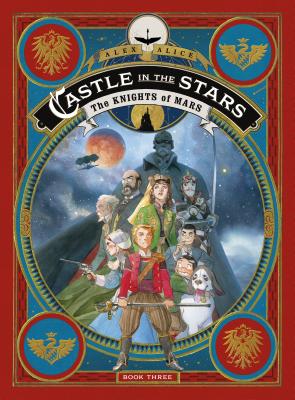 Castle in the Stars (Hardcover)

The Knights of Mars

What if man journeyed into space in 1869, not 1969? In The Knights of Mars, the third volume in this breath-taking fantasy graphic novel series, Alex Alice draws on Jules Verne and nineteenth-century romanticism to create a watercolor world of adventure and wonder to enchant adults and younger readers alike.

When Seraphin, Hans, and Sophie returned from their voyage to the moon, they didn’t come home empty-handed—they brought with them aetherite, a miraculous substance that defies gravity! To keep their secret safe from the Prussians, the trio lives in hiding on a remote island in Brittany. Meanwhile, Seraphin’s father has founded the International Society of Aether, a group of scientists dedicated to the peaceful pursuit of space exploration. But on the eve of their inaugural meeting, he vanishes without a trace!

The Knights of Aether’s last hope lies in a daring rescue of King Ludwig and Professor Dulac. They will find them on the farthest outskirts of the Prussian empire—the planet Mars!

Alex Alice is a French graphic novel writer and artist, working in France and sometimes the U.S. Born in 1974, he grew up in the south of France and had the chance to travel around Europe, where he developed a life-long passion for the ruins and castles of the medieval and romantic ages.

This infused his art, from the grim medieval setting of esoteric thriller “The Third Testament” (1997-2003, co-written with Xavier Dorison) to the primeval, mythic world of “Siegfried” (2007-2011), an operatic re-telling of the northern saga of the great dragon-slayer.

In Castle in the Stars, he draws on Jules Verne and nineteenth century romanticism to create a watercolor world of adventure and wonder, to enchant adults and younger readers alike. His works have been translated in more than 15 languages.