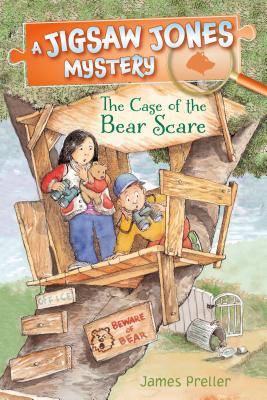 The Case of the Bear Scare (Jigsaw Jones Mysteries)

Featuring friendship, school, family, and a diverse community, these early illustrated chapter book Jigsaw Jones Mysteries from James Preller have it all.

Is there a bear loose in the woods by Jigsaw Jones' town? For once this second-grade detective and his partner Mila Yeh might be out of their depth! One way or another, these two young sleuths will get to the bottom of who, or what, is growling and snapping in those woods in The Case of the Bear Scare.

James Preller's wry, witty, Jigsaw Jones books are once again available to inspire the next generation of young readers, featuring both new titles and classroom classics!

Praise For Jigsaw Jones: The Case of the Bear Scare (Jigsaw Jones Mysteries)…

Jigsaw Jones and the Case from Outer Space:

“Fans . . . can count on the series for likable characters and a bit of a challenge here and there. . . . With short sentences, bits of humor, and engaging illustrations, the latest early chapter book in Preller’s long-running Jigsaw Jones Mystery series has plenty of appeal for young independent readers.” —Booklist

“Those who enjoy Preller’s works for younger readers will welcome the return of Jigsaw Jones. Highly recommended, especially for devotees of series such as David A. Adler’s “Cam Jansen,” Ron Roy’s “A to Z Mysteries” and “Calendar Mysteries,” and, of course, Marjorie Weinman Sharmat’s “Nate the Great.” —School Library Journal