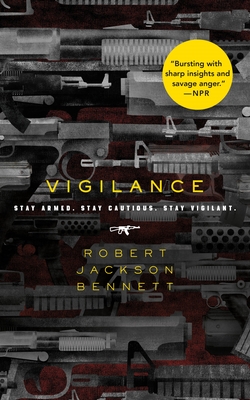 Robert Jackson Bennett's Vigilance is a dark science fiction action parable from an America that has permanently surrendered to gun violence.

The United States. 2030. John McDean executive produces "Vigilance," a reality game show designed to make sure American citizens stay alert to foreign and domestic threats. Shooters are introduced into a "game environment," and the survivors get a cash prize.

The TV audience is not the only one that's watching though, and McDean soon finds out what it's like to be on the other side of the camera.

Robert Jackson Bennett is a two-time award winner of the Shirley Jackson Award for Best Novel, an Edgar Award winner for Best Paperback Original, and is also the 2010 recipient of the Sydney J Bounds Award for Best Newcomer, and a Philip K Dick Award Citation of Excellence. City of Stairs was shortlisted for the Locus Award and the World Fantasy Award. City of Blades was a finalist for the 2015 World Fantasy, Locus, and British Fantasy Awards. The Divine Cities trilogy was nominated for a Hugo Award for Best Series. His new series begins with Foundryside. Robert lives in Austin with his wife and large sons.
Loading...
or support indie stores by buying on