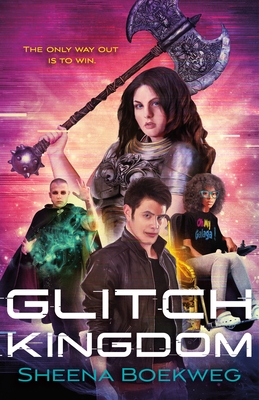 The teenage daughter of an executioner and the traitorous prince she can’t kill must reluctantly join forces to dethrone a paranoid queen after discovering they are trapped in a video game in Sheena Boekweg's fast-paced YA debut, Glitch Kingdom...

Ryo was the golden boy, the prankster prince, but with one stroke of a pen he has lost everything. Dagney and Grigfen were happy as minor members of the court, but when their father, the king's executioner, is branded a traitor, they each must deal in death in order to survive.. McKenna, queen of the enemy realm, has inherited a mission of conquest by assassination, but worries she's not up to the role.

But behind the crowns and masks hides a secret… All of these teens are actually players in the newest, shiniest, most immersive virtual reality video game, competing against each other for a highly coveted internship with a prestigious game developer.

But now this life-changing opportunity has suddenly become a deadly trap. A glitch in the software has locked the players inside the game, and they’ll need to escape before the fantasy world corrupts around them. The only way out is to win.

"[An] adventure reminiscent of Ready Player One....Boekweg affectionately evokes video game tropes, such as smashing objects for loot, leveling up, and pursuing side quests. Her inclusive cast includes Bluebird, a black girl who has muscular dystrophy and hacks her way into the game; Ryo Takagi, who is Asian-American; and Dagney, who is plus size." —Publishers Weekly

Sheena Boekweg, author of Glitch Kingdom, grew up reading books with tree branches peeking over her shoulder. Her novels feature plus-size girls with ambitions, love stories, and sometimes battle axes. She is a contributor to the body-positive anthology Every Body Shines, and believes that beauty is intrinsic, worth is unquestionable, and that you can’t solve every problem with food, but it can always help. She is well loved by a tall man with a great beard, their three kids, and the world’s most spoiled puppy.
Loading...
or support indie stores by buying on