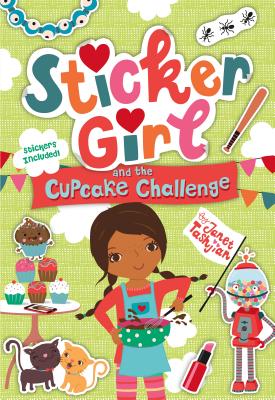 Sticker Girl and the Cupcake Challenge

These are just a few of the new stickers waiting to be peeled off of Martina Rivera’s new magical sticker sheet and SPRING TO LIFE. Student council is keeping Martina busy with a bake sale and cupcake-savvy Bev is excited to help out. The girls advertise their delicious creations and are thrilled to be invited to participate in a web show baking contest. Can Martina balance school and a ruthless cupcake competition, all while keeping her stickers in check? Or is this a recipe for disaster?


Praise For Sticker Girl and the Cupcake Challenge…

“Latina Martina Rivera and white best friend, Bev, open a new packet of magic stickers featuring Craig, their trusted cupcake companion (the only original sticker to return). . . . With nods to her Latin-American upbringing, the story respectfully portrays a close-knit family consisting of an annoying older brother, caring parents, curious toddler brother, knowing abuelita, and other extended family. . . . Readers will want to stick with future episodes of this a-PEEL-ling and accessible series.” —Kirkus Reviews

"Tashjian (the Einstein the Class Hamster series) sympathetically portrays the fears that can derail an otherwise confident girl like Marti, whose emotional journey is both realistic and humorous. . . . Newcomer Wilmink’s emoji-cute illustrations . . . play well with the upbeat tone of this satisfying series kickoff." —Publishers Weekly

Inga Wilmink is a freelance illustrator and surface pattern designer whose quirky, colorful designs and illustrations have appeared in products by American Greetings, Disney, Hallmark, and Macmillan Children's Publishing.