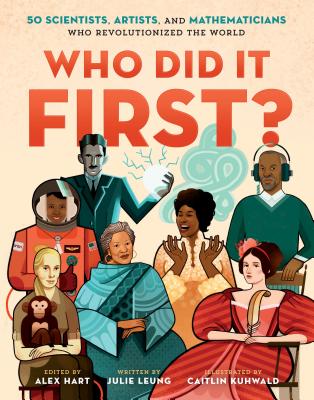 Who Did It First? 50 Scientists, Artists, and Mathematicians Who Revolutionized the World

A boldly illustrated and fascinating collection of profiles featuring the women and men who were pioneers of science, technology, engineering, the arts, and mathematics.

You likely know that Mae Jemison was the first African American woman in space. And maybe you know that Jane Goodall was the first human accepted into a chimpanzee community. But you might not know that Alan Turing was the first person to introduce the concept of artificial intelligence. Or that Tu Youyou was the first Chinese woman to win a Nobel Prize.

Who Did It First? 50 Scientists, Artists, and Mathematicians Who Revolutionized the World brings together all of these trailblazers into one stunning package. With both well-known figures and lesser-known heroes, editor Alex Hart, writer Julie Leung, and illustrator Caitlin Kuhwald celebrate the inspiring innovators who braved uncharted waters to pave the path for future generations.


Praise For Who Did It First? 50 Scientists, Artists, and Mathematicians Who Revolutionized the World…

Julie Leung was raised in the sleepy suburbs of Atlanta, Georgia, though it may be more accurate to say she grew up in Oz and came of age in Middle-earth. By day, she is the Marketing Director for Random House’s sci-fi/fantasy imprint, Del Rey Books. By night, she writes to calm the ghosts from the past. In her free time, she enjoys furtively sniffing books at bookstores and winning at obscure board games. Her favorite mode of transportation is the library. She currently resides in Brooklyn, New York, with her husband and many untold stories.

Caitlin Kuhwald received a BFA in Illustration from the California College of the Arts, and an MFA in painting from the Pennsylvania Academy of the Fine arts in Philadelphia. She returned to San Francisco after grad school to teach at her alma mater for nearly eight years. At CCA she taught illustration, drawing and watercolor, and she was also the Program Expert (Advising Liaison) for the illustration department. She now teaches illustration at the University of California, San Diego. Her illustrations appear in various magazines, books and other media. And her work has been recognized by American Illustration, The Society of Illustrators, Communication Arts and 3x3. Caitlin and her family of two moved to LA in 2014 and are happily living in the sunshine where they are now a family of three!

Alex Hart is the pseudonym for a children’s book editor and author who is the first person in his family to write and publish a book (Who Did It First? 50 Scientists, Artists, and Mathematicians Who Revolutionized the World). He lives with his husband in Brooklyn, New York and Hillsdale, New York.
Loading...
or support indie stores by buying on