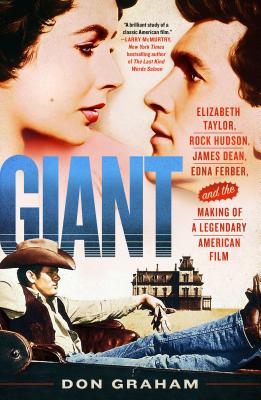 Don Graham's Giant is a larger-than-life narrative of the making of the classic film, marking the rise of America as a superpower, the ascent of Hollywood celebrity, and the flowering of Texas culture as mythology.

“Some films are so vital they become part of American history. Giant is one of them. Don Graham shows us how a volatile mix of some of Hollywood’s biggest, most troubled, personalities — Elizabeth Taylor, Rock Hudson, the doomed James Dean — came together under the brilliant direction of George Stevens to create an epic that rivals Texas in size, scope, and sheer impact. With insight and wit, Graham gives us a highly entertaining saga of how movies are made and why they become iconic.” —Nancy Schoenberger, author of the critically acclaimed Dangerous Muse: The Life of Lady Caroline Blackwood and Wayne and Ford: The Films, the Friendship, and the Forging of an American Hero

“You’ve seen the movie, of course? If not, you’ll rush to get the Blu-ray when you’re a few pages into Don Graham’s riveting book that tells the story of Giant from start to finish. That story involves half of Hollywood, and not only the stars — Elizabeth Taylor, Rock Hudson, James Dean — but those other superstars considered for the roles: Audrey Hepburn, William Holden, Grace Kelly, Clark Gable, and many others. This brilliant chronicle will grab you like a thriller.” —Sam Staggs, author of All About All About Eve